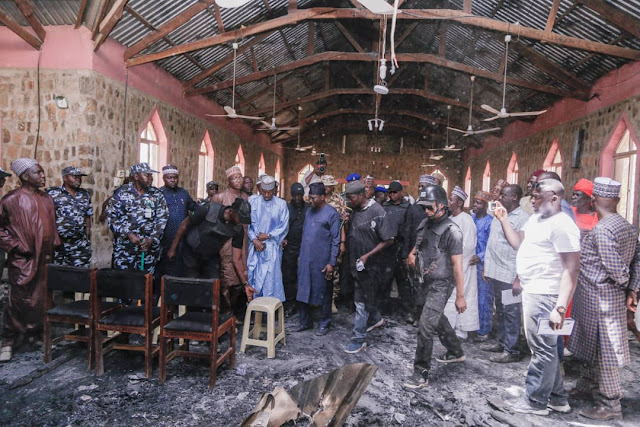 By Barnabas Augustine
23/2/2020
Following the attack on Garkida community in Gombi Local Government Area, on Friday, Governor Ahmadu Umaru Fintiri has assured rebuilding the community.
The Governor who was on assessment visit to Garkida in company of top Government officials, Brigade Commander 23 Armour Brigade Yola and the State Police Commissioner, describe the attack on Garkida “very devastating and sympathetic”.
Governor Fintiri said they were in Garkida for assessment of the degree of the attack and to commiserate with the people.
The Governor call on the Federal Government and especially the development partners to come to the aid of the community and rebuild it.
While commending the military for their gallant performance on the day of the attack, he stressed that his administration is talking with the military hierarchy to reinforce the area while his Government will facilitate recruitment of more vigilante and empower them to give support to the military.
Governor Fintiri assured that palliative support will be sent to Garkida community and the rebuilding of the community will start immediately.
Responding to Newsmen immediately after assessment of the level of damages on the community, the Brigade Commander 23 Armour Brigade Yola, Brigadier General S. G. Mohammed said that the military has the capacity to withstand Boko Haram attack.
He added that one soldier was killed and another one sustain injury from gun shot during the attack whike calling on the general public to always give useful information to the military to avert attack.
Also responding, the Chairman Gombi Local Government Area, Hon. Dimas Shekel expressed dismay over the Garkida attack by the insurgents and call on all the three tiers of Government to bring to an end the activities of the dreaded Boko Haram.
On his part, the Member Representing Gombi in Adamawa State House of Assembly, Honourable Japhet Kephas said no civilian was killed in the attack but three sustain injury from stray bullets. He added that properties worth billions of naira were destroyed on the day of the attack, Friday, 21st February.
Also, a traditional title holder in Garkida, the  Lawan Garkida Central, Hamidu Umaru call on the Federal Government  to send to Garkida military personnel who can safeguard them and to take necessary measure to end Boko Haram activities that is gradually destroying the land while one of the eye witnesses, Sunama Yusuf said that the insurgents entered Garkida at about 4:45pm, shooting guns sporadically, destroy residential buildings and places of worship.
Another eye witness who gave his name as Muazu said that the attack was selective and a coordinated one, adding that the insurgents were given information on places to attack and not to attack by insiders. He stressed that Garkida a peace loving community which the insurgents do not want which was why they conspired with mischief makers to destroy it.
While taken Governor Ahmadu Umaru Fintiri round Garkida General Hospital which was also attacked by the insurgents, the Chief Nursing Officer, William Sudu said that the terrorists burnt two vehicles of the hospital, one of which is an ambulance. Also destroyed in the hospital are the Pharmacist Store in which they  shattered and taken away all the drugs, Accident and Emergency Unit, Consulting Room among others.
Other areas destroyed which Governor Ahmadu Umaru Fintiri was taken round are places of worship, Divisional Police Headquarters Garkida, Military base and residential houses.