Home » Religion » NEWS;Gov Fintiri Inaugurates Chairman, Board Members MPWB, Charge them to be Steadfast and Diligent

NEWS;Gov Fintiri Inaugurates Chairman, Board Members MPWB, Charge them to be Steadfast and Diligent 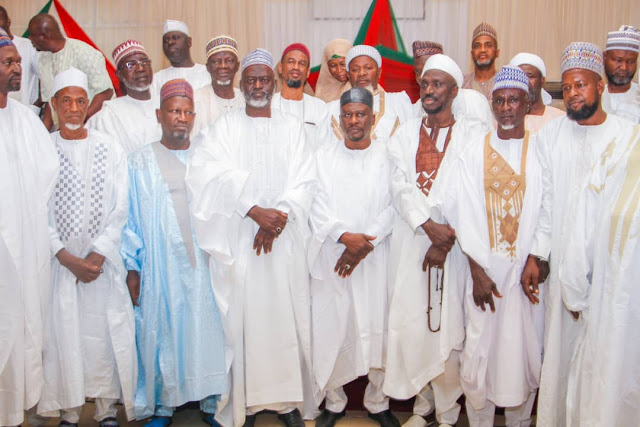 By Barnabas Augustine
7/2/2020
Governor Ahmadu Umaru Fintiri has inaugurated Chairman and Board Members of the Muslim Pilgrims Welfare Board and charge them to be stead and diligent to their responsibilities.
Performing the inauguration Friday at the Banquet Hall, Government House Yola, Governor Fintiri said that concerted effort is been made to reposition relevant government machinery and institution for effective service delivery by his administration.
Noting that the role of the board members is strategic in the society especially now that societies and communities lost their moral values, given birth to an imaginable crimes.
Governor Fintiri emphasised that the Chairman and his Board Members are most needed now more than ever especially in handling and organizing a successful Hajj. for intending Muslim pilgrims in Nigeria and Kingdom of Saudi Arabia.
While stating the commitment of his administration, Governor Fintiri said;
“As a Government, we have responsibility of restructuring institution of this nature with the view to correct abnormalities hitherto experience in the past”.

Maintaining that “This development therefore call on for individual and collective responsibility from all the relevant stake holders in order to maximally achieve the desire objective from which the board was established".
“In view of this therefore, I will live no stone unturned to ensuring that the welfare of our pilgrims in the State and the Holy land is not compromise”.
Challenging the newly inaugurated members of shun all irregularities, Governor Fintiri said that:
“We want to state here that we are not unmindful with the irregularities that characterise Haj operations in the past. In view of this I challenge you to use your vast experience to ensuring that the irregularities are avoided for a successful Hajj operation.
“Let me remind you of this administration commitment in providing enabling playing ground for the people of the state irrespective of ethnic, religion, social or political affiliation.
“Government will continue to do everything possible with its lean resources to fulfil its campaign promises and make the state a better home for all.
“...Bear in mind that religious activities are very paramount in success of all human endeavour” Governor Fintiri concluded.
Speaking on behalf of the inaugurated Members, the new Chairman, Muslim Pilgrims Welfare Board Aliyu Usman Marafa, thanked Governor Ahmadu Umaru fintiri for the confidence bestowed on them through their appointment to pilot the affairs of Muslim pilgrims in the State. He assured the Government their total commitment to render selfless service during haj operations. Maintaining that they will do their best to ensure a successful haj to Holy land.
Mallam Marafa stressed that the board under his leadership will invoke spirit of team work to justify the confidence bestowed in them by the present administration.
He therefore Solicit for support and understanding of Governor Ahmadu Umaru Fintiri to enable the Muslim Pilgrims Welfare Board to achieve its desire objectives while commending the Governor for his style of leadership that accelerated development in Adamawa State.
Those inaugurated are Aliyu Usman Marafa as the Chairman while the members are Malama Aishatu Mustapha Kwada, Malam Kabiru Mustapha Uba, Amina Abubakar, Malam Suleiman A. Bello, Malam Usman Bajika, Malam Musa Usman and Malam Ibrahim Danmama Umar.
Others are Ustaz Musa Abdullahi, Alh. Umaru Yaro, Malam Usman Nasir, Imam Bapparai Kyam, Modibbo Aliyu Wuro-Yembe, Ahmed Mohammed, Malam Abubakar Kaja, Ustaz Aliyu Ibrahim and Ahmadu Dammudo Mohammed.