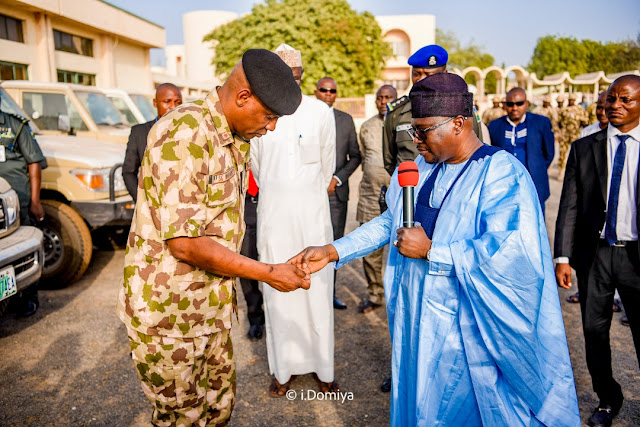 By Barnabas Augustine
24/2/2020
Three days after dreaded Boko Haram attack Garkida community in Gombi Local Government Area, Adamawa State Governor, Ahmadu Umaru Fintiri has donated ten Takonda Toyota Land Cruiser vehicles to the Nigeria Army.
Presenting the vehicles to the Army, Governor Fintiri said that the vehicles were donated as his administration continue support to the Army to defend the territorial integrity of Nigeria and their renew fight against insurgency.
The Governor stated that the fight against insurgency should not be left in the hands of the army alone, assuring that his administration will continue to give support and continue to work with the army, noting that security matters is a collective responsibility.
He called on all and sundry to join hand to fight against especially Boko Haram insurgents, armed banditry, kidnapping and other criminality in Nigeria.
The Governor applauded Nigeria army for its capability in terms of defending the country against external aggression while commending the army for repelling attack on the town of Garkida last Friday. Noting that despite the destruction of properties, no civilian life was loss. And for the two soldiers who lost their lives, the Governor donated two million naira each to their families to continue with the education of their children.
He assured the army his administration continue unflinching support from time to time until criminals and all form of criminality come to an end in Adamawa State. 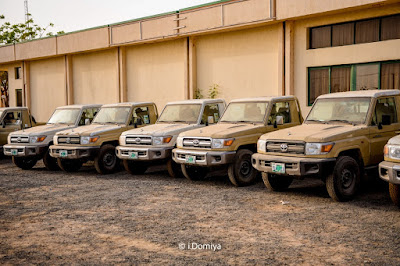 Receiving the ten Takonda Toyota Land Cruiser vehicles on behalf of the army, the Brigade Commander, 23 Armour Brigade, Brigadier General Sani Mohammed thanked Governor Ahmadu Umaru Fintiri for donating the operational vehicles to the army.
Brigadier General Mohammed assured to convey to the Chief of Army Staff through his channel the support given to the army by Governor Ahmadu Umaru Fintiri’s administration. He assured the Governor that the vehicles will be judiciously use for the purpose intended.