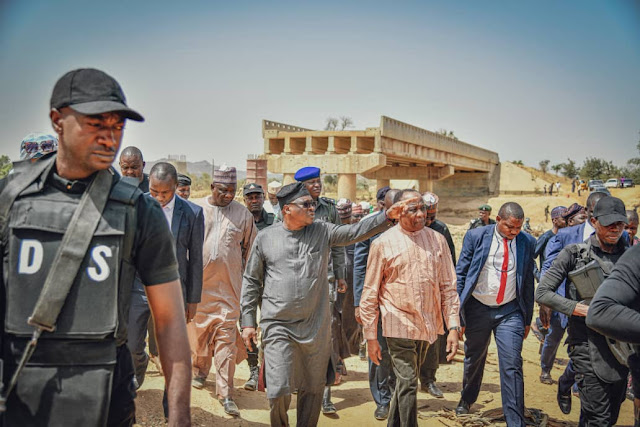 The Governor of Adamawa State, Rt. Hon. Ahmadu Umaru Fintiri has said that the North East Development Commission will be the prefer commission to handle the construction of bridges in Michika and Madagali in Northern Adamawa destroyed by Boko Haram about seven years ago.

In an interview with Newsmen shortly after Governor Fintiri and the NEDC officials inspected the bridges, the Governor described it as devastating and causing hardship on the communities of Michika and Madagali during raining season. Stressing that during last wet season, his Government had to called on Federal Ministry of Works to provide palliative before the people had a thorough fare.

The Governor said that his administration decided to have a collaboration with the NEDC  which is a major stake holder in rebuilding areas destroyed by insurgents to consider funding construction of Kudzum and Dilchim bridges in Michika LGA as well as Wuro Ngayadi bridge in Madagali LGA destroyed by Boko Haram as the State’s share in the NEDC programme and project.

Governor Fintiri stressed that the concern of his Government and that of the community is to see that the three bridges on Michika-Madagali road are constructed. Adding that if it continues to be in the present condition, commercial activities between people of Borno and that of Michika and Madagali communities will cease to exist.

He further said that the NEDC has agreed to his administration’s request, which was why the MD and other officials of the commission went to the areas to assess the level of the damaged caused on the bridges. Stating that very soon his Government will liase with the Federal Ministry of Works so that NEDC will take over funding of the construction of the bridges, which will form part of project share of Adamawa State with the commission.

Governor Fintiri further explained that the six North-East States had summit with the NEDC in Gombe early this month and discussed the ownership of some projects, what concern States and what NEDC will fund. He stressed, for his administration and particularly northern Adamawa, the three bridges in Michika and Madagali is the top priority for now.
The Governor noted that inadequate funding is the major set back to the ongoing bridges construction in Michika and Madagali axis and that has been problem for the contractor. Adding that the budgetary provision is not enough to complete the construction work. Even if the Federal Government will fund the N240m budgeted by the Federal Legislators for the road and bridges in Michika and Madagali, it would not go along way.
On his part, the Managing Director, North East Development Commission, Mohammed Goni Alkali has said that the commission had a proactive interaction with stake holder states on the development of North East in Gombe and discussed where the commission can make impact in terms of provision of infrastructure in North East Nigeria.
He explained that the commission was in Adamawa at the instance of the State Governor to see level of damages caused by the insurgents on the three bridges in Michika and Madagali Local Government Areas so that the commission will see it will intervene. Adding that the commission will liase with the Federal Ministry of Works who awarded the contract and discuss the taken over funding of the projects and its timely completion so as to improve the security of the area.
In another development, Governor Ahmadu Umaru Fintiri alongside his entourage made a stop over at the permanent site of the College of Health Technology in Michika and inspected the infrastructure;  for next action of relocating the institution from Mubi to Michika.  He has earlier promised to relocate Adamawa State College of Health Technology to its permanent site in Michika as spelt out in the act establishing the college.