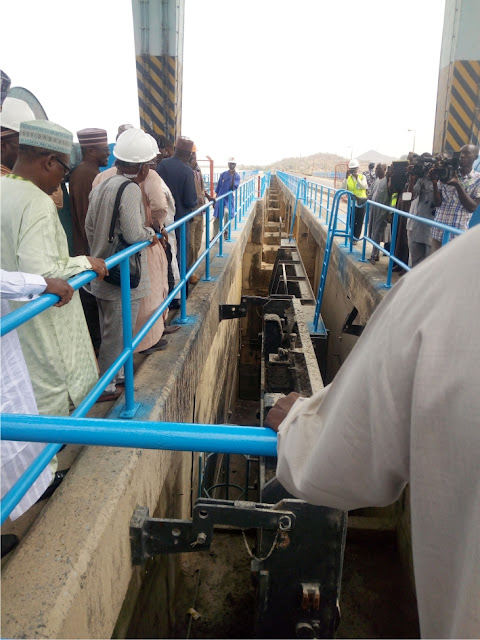 The Hon. Minister of  Water Resources,  Engr.  Suleiman  H. Adamu  expresses concern over the level of  work done at the site of Chochi Irrigation  Project in Yola.

Adamu who was on a working visit to Adamawa on Thursday, 5th March, 2020 to primarily inspect the project laments about the speed and design of the project, promises  to review  it. He also expressed  concern  of the encroachments being carried out to the  project site and urged the  Adamawa State Government, UBRBDA and the Contractor of the project to sort out the issue.

According to the Minister, "The primary reason of my visit to the state is to  see the level of work done  at Chochi Irrigation  site and to use the opportunity  to inspect  and commission  some of my ministry’s projects  in the state".

He added that "on my arrival, I visited  Kiri Dam and I am indeed impressed with what I saw. I also  commissioned  Small Town Water project carried out by the Federal Ministry of Water Resources at Mbaboi area of Yola South, Local Government Council of Adamawa State, I am also  impressed with the quality of  work done by the contractor".

Throughout his engagements in the state, the Minister  was accompanied by the Chief of Staff to Governor, Prof. Maxwell  Gidado SAN, the  Hon.  Commissioner for Water Resources, Hon.  Hassan  Kaigama, Directors of the Ministry and other senior Government officials in the state.