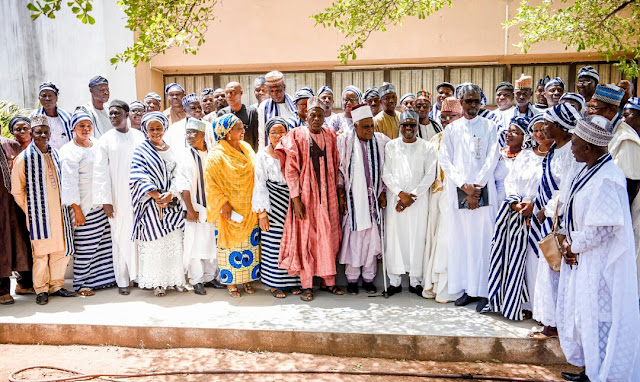 By Barnabas Augustine
10/3/2020
Governor Ahmadu Umaru Fintiri said that his administration has recruited one hundred vigilante to help in curbing the menace of insecurity in Garkida community of Gombi Local Government Area.
The Governor made the disclosure while hosting the United Bura Cooperative Society in Jimeta-Yola who paid him a courtesy call at the Council Chamber, Government House Yola.
Governor Fintiri said that his administration has taken the issue of security with all seriousness as it has been demonstrated by responding promptly by strengthening the security agencies with recruitment of more vigilantes that will lay their support to Nigeria Army in Garkida community, which has already started.
While condemning Boko Haram attack  on Garkida community that happened on 21st February this year, Governor Fintiri said that the State Government has started preparation in earnest to see that the properties destroyed are rebuild. Adding that his Government has collaborated with the North East Development Commission, share responsibilities for rebuilding destroyed properties, while maintaining that the Commission has already sent its technical team to assess the level of destruction caused by Boko Haram on Garkida community.
He urge Garkida people not to lose conscience, but support the Government to fight the common enemy, taken into cognisance that fighting insecurity is responsibility of all and sundry.
Governor Fintiri explained that his administration has inherited not only the menace of Boko Haram but to include, kidnapping, arm robbery, banditry, activities of the dreaded Shilla Boys and other criminalities. He said that his Government has confronted them accordingly and bring them to the barest minimum.
The Governor further assured that his administration will use the available law to ensure that perpetrators of all forms of criminalities did not go unpunished. He advised people of the State to not shield criminals to avoid the wrath of the law.
Governor Ahmadu Umaru Fintiri thanked United Bura Cooperative Society in Jimeta-Yola for given him the title of “Katsala” that is a man who stands to protect his people. He assured them he will always stand to protect the people of the State.
Earlier on, the spokesman of the United Bura Cooperative Society in Jimeta-Yola, the Wakilin Bura in Jimeta-Yola, Prince Simon Tarfa said they were at Government House Yola to congratulate Governor Ahmadu Umaru Fintiri over his victory at polls, his recent victory at the Supreme Court and to thanked him for his prompt and quick respond when the dreaded Boko Haram group attacked Garkida community.
Prince Tarfa  also appreciated Governor Fintiri for his Government timely intervention in terms of immediate need of Garkida people and lending  their voices at the Federal Government level. He assured their unflinching support for his administration.