NEWS;Gov Fintiri Assures Keying To Every Socio-economic Programmes That Will Benefit Adamawa 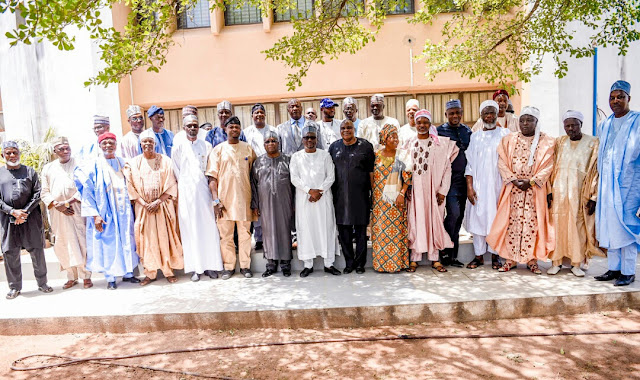 The Governor of Adamawa State, Rt. Hon. Ahmadu Umaru Fintiri has assured the people of the State his administration’s willingness to key into socio-economic programmes that will be beneficial to the State.

The Governor made the assurance when Həba  (Kilba) community from Hong Local Government Area paid him a courtesy call at the Council Chamber in Government House Yola.

Governor Fintiri, while thanking the Həba community for congratulating him over his victory at the Supreme Court said his administration will not hesitate to key into programmes either local or through developmental partners that will bring socio-economic development to the people of the State; particularly that of the World Bank and the Central Bank of Nigeria so as to improve agriculture and other rural development.

The number one citizen of the State stated that his administration is vigorously pursuing its Eleven-Point agenda which encompasses security, agriculture, education, rural development among others.
While calling on Həba community to continue supporting his administration with useful security advise, Governor Fintiri said that his administration has scored high mark especially in the areas of security and education. Noting that the security index released by the Nigeria Police from January 2020 to date shows Adamawa is down the ladder in the thirty-six States of the Federation;  this he said was as a result of his administration’s new security architecture in fighting insurgency and other forms of criminalities that is bedevilling North-east sub region.

Governor Ahmadu Umaru Fintiri assured the Həba community that their request would be tabled and some of them will be implemented immediately, as his administration has embark on construction of three road project in Hong Local Government Area.

He lauded Həba people for embracing education and produces over seventy Professors which is making a mark in their community.

Earlier, the spokesman of the Həba people, General Haladu Hannaniya, rtd. said  that the members of the Həba Elders’ Forum, Board of Trustees and traditional rulers were at the Government House Yola to congratulates Governor Ahmadu Umaru Fintiri on his victory at polls and his recent victory at Supreme Court as Governor of Adamawa State and to salute him for the developmental stride he is bringing to the State.

General Hannaniya applauded Governor Fintiri for the role he played in securing the World Bank approval for the construction of Uba-Gaya road which proves his policies are for the even development of the State.

The retired General explained that the Həba people are agriculturalists and Education is the main industry of the people. He therefore call on Governor Fintiri to consider given admission to their children to study courses of their choice in public universities in the State. Noting most of the professional courses were reserved for the children of the elites.

He call on Governor Fintiri to strengthen and bring more development especially in Adamawa State University to give more opportunities to the teaming youths while noting the poor performance of students in JAMB and SSCE, which he said the State Primary and secondary education requires intervention. He therefore requested the Governor to carefully select and institute a community that will help in reviving the sector.

General Hannaniya also requested Governor Fintiri to key into agricultural programmes of the Central Bank of Nigeria such as the Anchor Borrower Programme having Adamawa is an agrarian State and recommended sports development as another means of engaging the youths positively.

With regard to the security challenges in the State, General Hannaniya appeal to the Governor to influence the establishment of Police Mobile Force Squadron at Mararraba Mubi and support the local hunters with vehicles and other incentives to bost security in Həba community having it suffered from the insurgents attack, kidnapping and herders attack which affected the production of food produce of their people.

While thanking Governor Fintiri for revisiting Mararraban Pela-Maiha road, General Hannaniya appeal to Governor Fintiri to make its completion a priority to facilitate easy movement of people and farm produce so as to boost their economy activities. And, to consider the construction of Kala’a, Ziga Yerima, Kwakwa, Mulna, Garari joining Pela Maiha road; Gaya, Gashala, and Dabna road; Gashaka, Dzuma, Ngalbi road and reconstruction of road from Main Gate of College of Education Hong to the main campus as well as drill boreholes for provision of water to enable conducive learning environment for the students  among other request he tabled before Governor Fintiri.