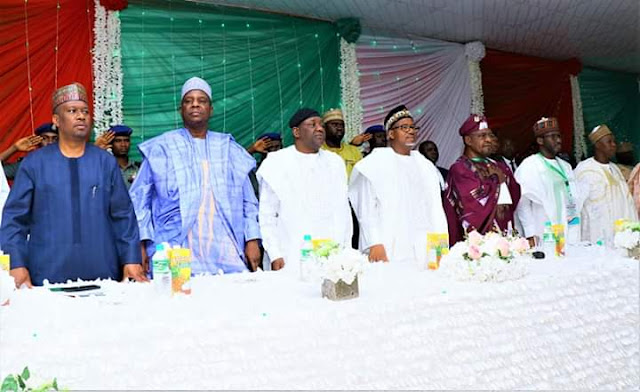 Adamawa State Governor Ahmadu Umaru Fintiri was among delegates and party stakeholders who converged in  Bauchi for the North East zonal caucus meeting of the PDP with a view to harmonizing modalities that will ensure successful party congresses.

North East Zonal Chairman of the PDP Barrister G T Kataps and  Deputy National Chairman North Nazif Gamawa  who welcomed participant took time to highlight the achievements recorded by the three PDP Governors in the North East ( ie the Governors of Adamawa, Bauchi and Taraba) . They posited that North East will soon be won over completely by the party given the abysmal failure of the ruling party ( APC)  in the country.

Host Governor Sen Bala Mohammed ( Kauran Bauchi) decried the level of poverty and insecurity in the North East saying the region has the human capital capacity that can be harnessed to surmount these challenges. He thereafter advised leaders in the PDP to embrace all party faithfuls and ensure the party remains formidable in the grassroot.

Adamawa State Governor Ahmadu Umaru Fintiri called on PDP members to be loyal to the party. Represented by his Deputy Chief Crowther Seth, Governor Fintiri said the PDP is waxing stronger which is a testament to the fact that the people in support of the Party.  He urged PDP leaders not  fail in the confidence reposed in them.

The Speaker of the Adamawa State House of Assembly Rt Hon Aminu Iya Abass who spoke on behalf of both present and past Speakers too.ised to ensure that the legislative arm of Government works in synergy with the Executive in formulating policies that will better  the lives of the common man.

There were speeches from various speakers from where the Women representatives called for an all inclusion that will give the women the 35% required affirmative positions within the party.

The party at the end of the meeting also unanimously agreed to cede all Ex officio offices of the party to women in all the states.

Party nomination forms were distributed to State Party Chairmen who were in turn mandated to go and ensure that all those who desire to aspire for positions within the party are given the chance to participate.
00:21
adamawadailyreport@gmail.com
News
Email ThisBlogThis!Share to TwitterShare to Facebook