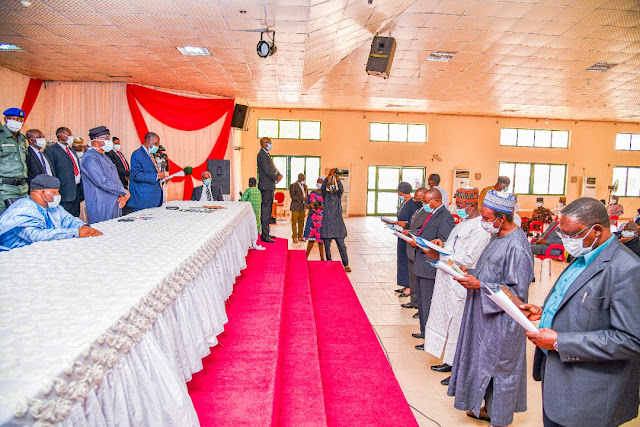 The communal clash affected four villages of Tingno Dutse, Sabon Layi, Bagashi and Tito where lives and properties were destroyed.

In the same vain, the Governor sworn in Justice Kenson Lawson and Justice Musa Usman as Judges in Adamawa State High Court. 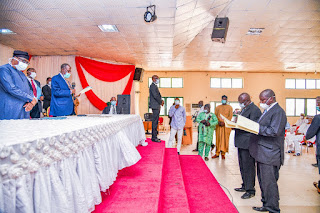 Until their elevation, Justice Lawson was the Director Public Prosecution while Justice Usman was the Registrar of the State High Court.

Swearing in the members of the Commission of Enquiry and the two judges, Governor Ahmadu Umaru Fintiri reminds them of the sacrosanct of the oath they have taken for the citizens would look up to them in the dispensation of justice while noting to them they will account for every action to their conscious and their Creator as well.

He charged the new Judges to be conscious of the need to be independent and uphold justice in all circumstances as well as ensure speedy dispensation, particularly of criminal cases with due regard to administration of Criminal Justice Law of Adamawa State 2018. He described the Judicial Arm of Government as respectful and knowledgeable.

“This Arm of Government in Adamawa State is founded on lofty ideal of excellence, knowledge, integrity, hierarchy and respect”, Governor Fintiri said.

“All the three seats must be upheld to ensure stability and the excellence that have been established over time. Anything to the contrary or deviation from these will spill doom for the Judiciary in Adamawa state which we must all strife hard to avoid”.
Governor Fintiri therefore call for a synergy between the Bar and the Bench to achieve all these.

He noted that the closure of courts in the State is worrisome which he said is mitigating against the dispensation of justice and worsening the plight and probable innocent of persons awaiting trial in the State. Adding that it has increased the number of suspects in the police custody that cannot be arraigned.

“The Chief Justice of Nigeria has already through the National Judicial Council directed that courts resume session in accordance with COVID-19 protocol”, Governor Fintiri stressed.

“I urged the Honourable Chief Judge to direct courts to resume session in Adamawa State accordingly”
The Governor enjoined the Judiciary to prove that it is the temple of justice where every law abiding citizen can come for justice.

Those who were sworn as members of the Judicial Commission of Enquiry of Tingno-Chobo communal clash are Justice Hafsatu Abdurrahman (Chairperson) while Barrister Aji Kamale, Akanmodu Abayomi, Professor Kalep Bulus Filli, Yakubu Sambo and Aliyu Mohammed will serve members.

In their separate vote of thanks on behalf of those sworn in, Justice Hafsatu Abdurrahman and Justice Kenson Lawson thanked Governor Ahmadu Umaru Fintiri for finding them worthy to serve the state and they have promised to discharge their responsibilities accordingly.

Highlight of the ceremony was administering of oath of office and allegiance on the Six-Man Tingno- Chobo Judicial Commission of Enquiry and the two State High Court Judges by the State Chief Judge, Justice Ishaya Kida Banu.