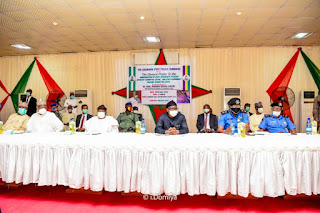 The committee which were inaugurated at the Banquet Hall, Government House Yola is the first of its kind in the state and is geared towards improving the relationship between the police and members of the public.

Addressing the gathering, Governor Fintiri said that the inauguration of the committee marks another milestone of his administration in its relentless strife to reduce insecurity and to fight crime and other criminalities in Adamawa.

The Governor disclosed that on his assumption on the number seat of the State, he halted the activities of Shilla Boys, cattle rustling and kidnapping, which has now become a history in Adamawa.

He noted that it is imperative that key stakeholders should work together with the police in cross fertilising ideas and exchange of information so as to safeguard lives and properties of law abiding citizens.

The number one citizen of the State said that the committee is not Police Committee. “It is pertinent to point out that the Police Community Advisory Committee that is about to be inaugurated it is not Police Community neither it is an alternative to Nigeria Police. But purely an advisory body which is meant to facilitate and establish trust between Police and their host community” Governor Fintiri said.

He further explained that the Committee in Adamawa State will be chaired by the State Commissioner of Police and to be co-chaired by the Lamido Adamawa who is the President of the Council of Emirs and Chiefs in the State.

The Governor stressed that Government is expecting to see a policing strategy that focuses on building tides throughout the state that could lead to improve public safety. “We should all realise that in this time when criminals are becoming more daring and sophisticated, Community Policing is one of the strategies to checkmate them”, Governor Fintiri noted.

He therefore commended the Inspector General of Police, Mohammed Abubakar Adamu for approving the Committee by State, which he emphasised will go along way in reducing crime and boosting security.

The Commissioner of Police, Adamawa State Command, Olugbenga Adeyanju while thanking Governor Ahmadu Umaru Fintiri for his pragmatic and immense  support in ensuring that Community Policing works in the State, said that the mission is to ensure all stakeholders at various levels of the Community Policing work in concert with the Police in the implementation of the laudable project.

CP Adeyanju explained that Community Policing is a strategy where upon members of the community are involved in problem solving decisions and work in concert with the Police to effectively police their community.

In an interview with the Chairman, Adamawa State Christian Association of Nigeria (CAN) Bishop Stephen Dami Mamza and his Muslim Council counterpart Alh Gambo Jika who are Members of the advisory committee lauded the initiative which they said will go a long way in halting criminalities in the State.

The event saw the strict adherence to Covid 19 guidelines of social distancing, use of face masks and hand sanitizers.