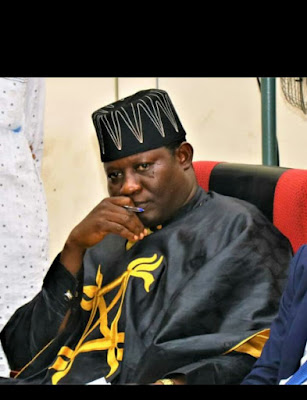 Long, so far. All can be said that effects of memory loss can infer that realities of today are fast forgotten due to selective amnesia. It comes as no surprise when a decision taken in haste overclouds previous experiences.
Ahmadu Fintiri has been barely one year in office, yet many expect him to perform what Umaru Bindow achieved in four years in office, aye four years in office. What Fintiri started as Acting Governor, continued by Ngillari, before the election that forged him into power are the early indicators of modern Adamawa state. Yes, Dr Luka John is such a person that should be questioned, first for his academic capacity and secondly for his depth in knowledge of events in Adamawa State. With due respect to his doctorate title, given or coveted , it is better not to engage in polemics with him, but issues should be addressed to checkmate moves by fourth  columnist whose aim is to sabotage the well-meaning government of governor Fintiri.

Dr Luka John started by condoling the Governor on the passing away of his mother only to delve into the political issue of losing grip of the political situation that could cost him his office. However, the author should note that Fintiri’s number one goal is not the office, but the wellbeing of the citizens of Adamawa state that need succor in the indefatigable task of curbing the Corona Virus threatening mankind including countries with high technology. In our current situation, it is out of perspective that a person of such academic credentials should make accusations and assumptions without subjecting his conclusions to rational deductions on the issues at hand.  How can he say the governor, Ahmadu Fintiri has been “behind closed doors” or hiding away from the public and “issuing executive orders”.  Dr John should be wary of the appellation preceding his names, lest he tarnishes he academia and create a negative image of the institution he represents. In another vein, he should not be hasty in deciding the people that are “fluidly” and the consistencies of which he knows nothing about. This write up is meant to correct all things that might cause problems in our society, therefore we should understand issues that bedevil us and not engage in polemics that may appear to be conflicting. The government is all inclusive that welcomes all corrections and has no malice towards constructive corrections even from the rival All Progressive Congress as long as it will lead to the development of the state. It is not a “do or die” affair for Governor Fintiri whose purpose is the good of the people of the state.

The problems on ground that the Governor has to contend with go beyond what the author of the write up thinks. It is not only the issue of the palliatives, but the fundamental issues of preventing further spreading of the pandemic in the state to the average man on the street. The order given by the governor is enough, while at the same time John Luka fails to understand that enforcing that order demands resources. Dr Luka John fails to see beyond what the pandemic entails and therefore thinks of only the fasting period. Governor Fintiri is a practicing Muslim and knows the importance of Ramadan. The clerics in Mecca know same, but suspended Hajj, all in a bid to check this scourge that has caused a lot of harm to the world. With so limited resources, what does Dr Luka John want the state Governor to do? Sitting down in a faraway place  and taking care of animals is not the same as governing human beings that think differently, act differently and are disposed to do think wittingly to the credit or detriment of their political leanings. It appears that the political leaning of Dr. John is not disposed to this government. Despite government’s efforts to curtail the spread of the disease that has affected so many and threatens the lives of many, all indigenes and people of Adamawa and those that wish the state well should focus more on how to combat the pandemic rather than create diversions that border on politics.

The accusations that the governor has failed on his campaign promises Is malicious. It is self-evident that he could not have done better. It is not surprising that the  John did not see the backlog of problems that Bindow Jibrilla left, including over twenty five thousand employments in the wee days of his administration after losing elections. The debts he left behind are so enormous that one can only imagine how long it will take to get the state out of the doldrums. If we must talk about the palliative for the fasting period, the government is also thinking about what the state has to face after Ramadan.

A good point raised in Luka John’s article is the issue of the Corona Virus victims. However, the doctor appears not to be in the know as to where they are kept. He should however be rest assured that the corona virus victims in Adamawa are accommodated in facilities that less than twenty percent of ordinary citizens in the state enjoy. Therefore, the problems in Gombe state cannot occur in Adamawa except if sponsored to embarrass the government.

On the issue of roads, Luka John seems to hibernating in Kaduna with little knowledge of what is going on in Yola. He has no idea of what changes are taking place. He does not know that the roads in Malamre, Nassarawo etc were the products of Fintiri’s two months in office that set the pace. As for Bachure, he should please ask his associates in Yola to send him pictures of the present state of affairs. As for the fly-over, certain logistics have to be taken into consideration. First is the dwindling resources in face of the all-round problems caused by the Corona Virus pandemic. Even the Federal Government has been afflicted to the extent that many projects have to give way to the imminent threat that the pandemic poses.

Luka John has also by default ventured into a territory he knows nothing about by speaking for Adamawa state workers of which he is not one. If anyone should complain or criticize the Government of Umaru Fintiri, the Nigerian Labor Congress (NLC) should do that. When he hears rumors, he should leave them at that level or try to confirm them from the source. It is a well-known fact that relatives and hangers-on give their better-off cousins a pathetic image of what is going on so as to get financial support from them. Adamawa is a civil service state spattered with a few beggars, but for sure it is not a beggar state, poor probably, but richer than most states in Nigeria if standards of living is anything to go by. The Fintiri government has kept the state afloat and has done creditable well to uplift the lifestyle of the citizenry.

Dr Luka John seems to be so incensed by Fintiri as a person by mentioning the issue of Sukur kingdom? Despite being a world heritage site, Sukur was never really a kingdom in Nigeria.The heritage cite is occupied by the Sukur people who are by far outnumbered by the Marghi and therefore sought refuge in the high point of the hill. Dr Luka John is probably from Sukur, hence his attempt to get Fintiri embroiled in an issue that was decided by the previous administration before Fintiri came into office. It is an error to therefore push the blame of current issues to Fintiri.

A lot can be said about Fintiri, the man that set the ball rolling for developmental projects in Adamawa State. In less than three months as acting governor, he set the pace and standard that subsequent governors could not ignore. Dr Luka John is not in the flow of affairs in the state. Despite of the Corona virus pandemic, Adamawa is making steady progress and the fresh air governor has not failed the people of Adamawa State. Contrary to what the philosopher thinks, Fintiri has not failed Adamawa citizens, but has probably offended beneficiaries of the past government that receive money, gratis, and contribute nothing to the progress of the state.

Fintiri’s government has not failed the people. It will remain steadfast and focused despite distractions from power-mongers that will do everything to see the fall of Fintiri and his effort to place the state on the right pedestal.

George Kushi is the Chief Press Secretary to the Deputy Governor of Adamawa State and writes in from Yola.