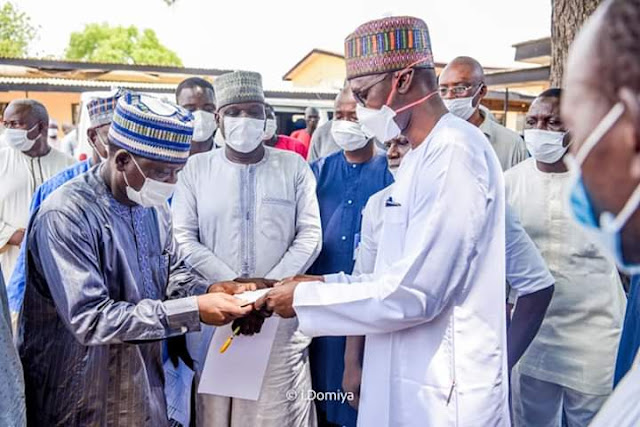 By Barnabas Augustine
20/5/2020
Access Bank has donated more medical equipment to Adamawa to help contain the  further spread of the novel coronavirus in the State.

The equipment which were loaded in a truck was received by the Secretary to the State Government, Mal. Bashiru Ahmad on behalf of Adamawa State Government at the Specialist Hospital, Yola.

While receiving the equipment, the SSG thanked Access Bank Coalition Against COVID-19  for the gesture and called on other cooperate organisations to emulate them by making donations to the State.

He assured that the State will put the equipment into use in the interest of healthcare in Adamawa and the country in general. Adding that, the materials will be used to expand the already existing Isolation Centre in the State and that before the week ends, the equipment will be installed at the expanded Isolation Centre at the Specialist Hospital Yola.

Earlier, while presenting the consignment to Adamawa State Government , the Manager of Access Bank, Yola branch, Mr. Danjuma Mustapha said the donation was made as the corporate social responsibility of the bank under Coalition Against COVID-19 to complement the gesture put in place by the Government in fighting COVID-19.

It could be recalled that on Monday, Access Bank made the first tranche of the donation to Adamawa State Government which include one hundred beds and mattresses, Pillows, bedside tables, drawers, lockers, bedsheets and three ventilators.