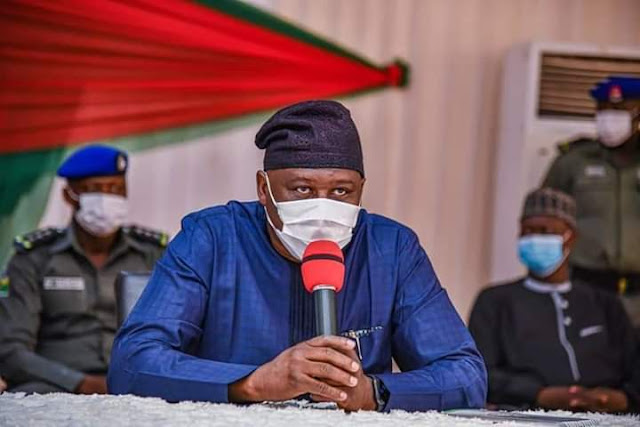 Adamawa State Governor, Rt. Hon. Ahmadu Umaru  Fintiri has warned public office holders not to corner palliatives meant for the needy and the vulnerable in their respective communities.

Governor Fintiri decried that he has received several complains that the previous palliatives shared was characterised by segregation, diversion and selfishness.
The Governor said this Monday at the Banquet Hall in Government House Yola while holding meeting with members of the State House of Assembly, Local Government Chairmen and  Commissioners who are part of the distribution committee in the State and their respective Local  Government Areas.

He said that the meeting was called to evaluate and change strategy how subsequent palliatives will be distributed in the State. Adding that the Palliative Committee he formed cut across people of the State irrespective of political party. He said, down the grassroots he ordered the committee to include representatives of both Christian and Muslim associations and traditional rulers to ensure equitable distribution.

Governor Fintiri warned that as the next batch of the palliatives will be distributed, they should ensure that they distributed it to the needy irrespective of political party or any affiliation.

“In the next batch of the palliative the Government will release, we should be serious, we should seen to be doing the assignment for which we were being represented; whether you are State Assembly member, a Commissioner or a Local Government Chairman” Governor Fintiri Said.

“The palliative is meant for the vulnerable and the needy in the community... they have done their job by electing us to represent them; let’s represent them well.

“I can only use my political party to contest for an election but I can not use my party to the disadvantage of other Adamawa people. They all belong to me”, Governor Fintiri stressed.
Speaking to Newsmen after the meeting the Executive Chairman Mubi South Local Government Alhaji Jingi Rufai and Member representing Guyuk in the State House of Assembly Mr. Adwawa Dongolok promised to ensure fair and just distribution of the next batch of palliative in their respective communities.
The meeting was attended by Speaker Adamawa State House of Assembly Alhaji Aminu Iya Abbas, Deputy Speaker, Mr Pwamakaino Makondo,  Members of the State House of Assembly, Secretary to the State Government Mal.  Bashiru Ahmad, Commissioners, Local Government to Chairmen  and other top Government Officials.