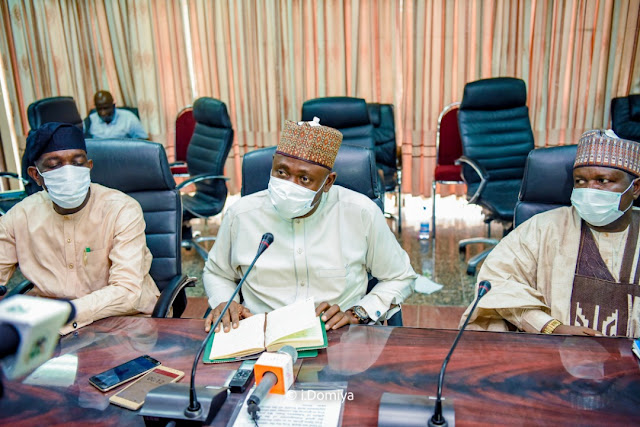 By Barnabas Augustine
24/6/2020
Adamawa State Executive Council has approved the purchase of fertilizer and assorted Agro chemicals  for the 2020 farming season for farmers in the State.
Briefing Newsmen after the 8th Council meeting presided by Governor Ahmadu Umaru Fintiri Wednesday at the Council Chamber, Government House Yola, , the Honourable Commissioner Ministry of Information and Strategy, Dr. Umar Garba  said that the Council has approved  five hundred and fifty  million naira for the procurement of five thousand metric tones of NPK fertiliser.
The Commissioner disclosed that the State Ministry of Agriculture will sale each bag of 50kg NPK fertiliser to farmers at the cost of five thousand five hundred naira which is less than the price in the market.
Dr. Garba said that the Executive Council has also approved over one hundred and six million naira for the procurement of fifty two thousand litres of assorted agro chemicals, one thousand unit of  fifteen litres sprayers and twenty thousand kilogram of hybrid seed for sale to farmers.
He further explained that out of the amount, over 96 million naira would be spent from the amount for the purchase of agro chemicals while over  9 million naira for the purchase of hybrid seed. Adding that this will be done in the light of the season to prepare the farmers as the Government has already prepared to give food security for the State.
The Commissioner explained that the reason why the fertiliser procurement was delayed was due to the security situation in the North East resulting to ban on NPK fertiliser by the office of the National Security Adviser in the zone which was used by the dreaded Boko Haram insurgents to manufacture improvise explosive devices.
The spoke man of the Council said the Government is working out plan to supply a brand of NPK fertiliser that is certified by the office of the National Security Adviser and taken caution not to be a career of a risk.
Contributing, the Honourable Commissioner of Agriculture Dr. Dishi Khobe said that the timing of the supply of the fertiliser is not late having the reigning season has just started. He said that the prayer of the Government is for the office of the NSA to approve their request soon.
Also contributing, the Head of Service, Dr. Edgar Amos Sunday said that at the meeting, the Council has commenced deliberation on the possibility of commencing Contributory Pension Scheme in Adamawa. Explaining that the current pension administration is called Define Benefit Scheme where on retirement civil servants gets pensions and gratuities.
Dr. Sunday said that that has accumulated areas and inability to access retirement benefit which caused a lot of financial challenges.
He further revealed that since 2014, Federal Government has  Promulgated Pension Reform Act that has been mandatory throughout Nigeria but Adamawa is yet to implement it.
The Head of Service stated that the commencement of the deliberation of the new pension scheme by the Council was the process for the implementation of the contributory pension scheme in the State, which will be implemented possibly by January 2021.