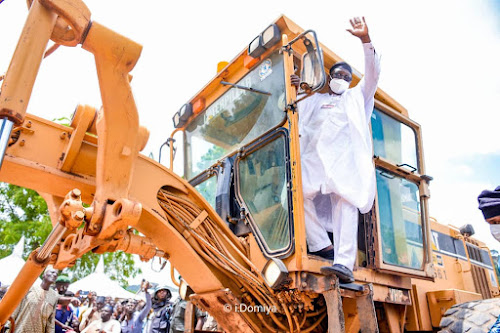 By Barnabas Augustine
28/7/2020
Governor Ahmadu Umaru Fintiri has flagged-off construction of township roads in Madagali and Michika Local Government Areas as part of his campaign promise to construct road infrastructure across Adamawa State.
In Gulak, where the Governor flagged -off road construction in Madagali Local Government Area, Governor Fintiri said the roads to be constructed include Central Primary School to Cottage Hospital Gulak, Market road, Motor Park road, and Jalingo road to Government Day Secondary School Gulak among others.
The roads have the total length of 6.6 kilometres and it will cost N1.6 billion naira.
Governor Fintiri highlighted  other ongoing work in the area to include rehabilitation of Gulak cottage hospital, Government Day Secondary School Gulak and water project among other numerous developmental projects.
He listed other developmental projects to soon commence in the area to include construction and rehabilitation of schools in Madagali, Kirchinga, Shuwa, Primary School Gulak, as well as clinics to improve healthcare services.
While in Michika where Governor Fintiri flagged-off construction of 5.1 kilometre in Michika township road, he explained that the projects are coming after the successful commencement of total overhaul in Michika General Hospital, while stressing the position of government towards delivering his eleven points agenda targeted towards redefining the relationship between government and the people.
Governor Fintiri revealed that his led administration has secured an intervention from the Multi Crises Recovery Project MCRP for the construction of Baza - Mubi road which has a length of 32 kilometres and Michika General Hospital road in the state.
The Governor said his government will rebuild Michika among other areas ravaged by the activities of the dreaded Boko Haram insurgents, to reverse the total neglect the people suffered.
He urged the people to support the contractor handling the project, appealed for their prayers and give maximum cooperation to his administration so that dividends of democracy will continue to come to their door step.
The roads to be constructed in Michika include Mukaddas road(0.57kl), Lassa road (0.95kl), Matakam road(1.7kl), Low cost road(1.1kl) and Hospital road extension(0.06kl).
In his remark, the Commissioner Ministry of Works and Energy, Adamu Atiku lauded Governor Fintiri for embarking on gigantic projects in the state despite its lean resources. Adding that the projects in  Madagali and Michika are long over due because of the neglect as a result of combined effects of insurgency and ecological degradation.
He said the road projects in Michika will be completed in eight months while that of Madagali will be completed in fourteen months and assured his ministry’s careful supervision.
On his part, the Managing Director, MSRR Triacta Nigeria Limited, Engr.  Elie Abu Farahat thanked Governor Ahmadu Umaru Fintiri for awarding the contract to his company and assured timely and qualitative construction work to the people of the area.
14:43
Adamawa Daily Reports
News
Email ThisBlogThis!Share to TwitterShare to Facebook