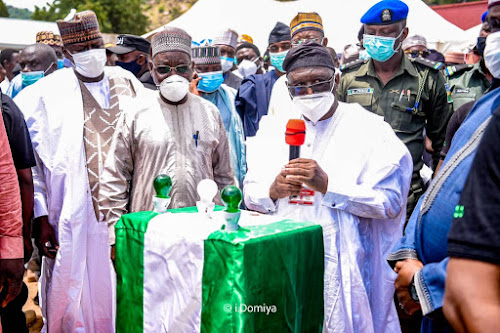 By Barnabas Augustine
28/7/2020
Adamawa State Governor, Rt. Hon. Ahmadu Umaru Fintiri has on Tuesday commissioned electricity sub-station that connects Michika and Madagali Local Government Areas in northern Adamawa to national grid which cost ₦283.8m.
Speaking at the ceremony in Michika, Governor Fintiri disclosed that the sub station will cover major towns of Baza, Watu, Michika Shuwa, Gulak and Madagali in northern axis of the state.
He stressed that his administration has prioritize rural development so that the people will contribute their quota to national development.
He enjoined people of Madagali and Michika LGAs to utilize the electricity, by engaging in commercial activities so as to improve their income and standard of living.
The Governor warns against activities of economic saboteurs, who vandalized electricity installations while calling on the people to be vigilant and report any suspected vandal to relevant authorities.
While making a remark, the Honourable Commissioner, Ministry of Rural Infrastructure and Community Development, Alhaji Abdullahi Adamu Prambe stated that the electricity project covers the areas that were cut off from the national grid by Boko Haram terrorists since 2014.
He applauded Governor Fintiri’s government for the support to the ministry towards executing the rehabilitation work of the network from Michika to Madagali as well as rehabilitation of 7.5MBA 33/11 KB power transformer at Michika.
Contributing, the Zonal Managing Director of Yola Electricity Distribution Company (YEDC), Baba Umaru Mustafa revealed that plans are also on the way to improve on low experience  in Mubi and environs.
He called on electricity consumers in Michika and Madagali Local Government Areas to ensure prompt payment of electricity bill and be watchful to avert the activities of vandals for the benefit of the larger society.
15:09
Adamawa Daily Reports
News
Email ThisBlogThis!Share to TwitterShare to Facebook