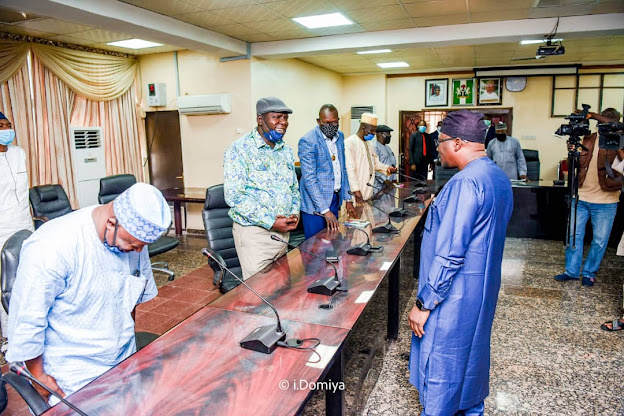 By Barnabas Augustine
27/7/2020
Governor of Adamawa State, Ahmadu Umaru Fintiri has meet with the leadership of the Nigeria Labour Congress, NLC Adamawa State Chapter over the shortfall on the month of July, 2020 Salary.
Assuring the labour leaders payment of the July arrears in August at his office in Government House Yola, Governor Fintiri described the development as unfortunate and measures has being taken to avert its repetition.
In the meeting which was held at the instance of the Governor, the number one Adamawa citizen stated that he was not aware of the development until he saw the state NLC’s bulletin, expressed dissatisfaction with their approach having them not hear from him before releasing the bulletin.
Governor Fintiri explained that upon reading the bulletin he made enquiry from the state Accountant General the reason for the shortfall without his knowledge, but the AG assured that the problem would be rectified and the state civil servants will hence enjoy their full emolument.
He stressed that under his watch the welfare of the civil servants will remain sacrosanct, as he demonstrated in prompt payment of their monthly emoluments even when dreaded COVID-19 affects the economy.
Governor Ahmadu Umaru Fintiri called on the labour leaders to maintain the symbiotic relationship with his led administration and treat minor issues with decorum while appealing to the civil servants to excise patience as his Government has implemented minimum wages in the State since last year.
The delegation of the Nigeria Labour Congress, Adamawa State chapter was led by its Chairman, Comrade Emmanuel Fashe.
22:19
Adamawa Daily Reports
News
Email ThisBlogThis!Share to TwitterShare to Facebook