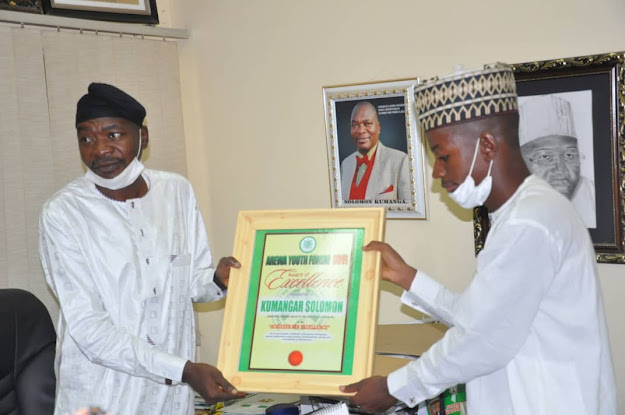 By Barnabas Augustine
24/7/2020
The National Executives of Arewa Youth Forum has presented Award of Excellence to Solomon Kumangar, the Director General Media and Communication to Governor Ahmadu Umaru Fintiri.
Presenting the award Friday to Solomon Kumangar in his office in Government House Yola, the National Chairman Arewa Youth Forum, Comrade Mujaheed Tahir said the union selected the DG for the award because of his societal transformation and peace building initiation in Adamawa State.
He described Kumangar as a man of wisdom, knowledge, creative, knows technical know-how, respectful and visionary leader who through his office the world knows the salient achievements of Governor Ahmadu Umaru Fintiri while lauding the media team of the Governor for exhibiting professionalism.
Comrade Tahir maintained that the award presented to the DG Media and Communication was indirectly presented to Governor Fintiri following his laudable achievements in the education sector.  He said the Governor has demonstrated he has youths at heart; paid scholarship to Adamawa indegenes studying in tertiary institutions across the country, which has transformed the lives of many students.
The AYF National Chairman appreciated Governor Fintiri his leadership style of including youths and women in his led administration saying it will  change the negative narratives that the future of the youths is blinking for taken the mantle of leadership in the country.
Earlier, Comrade Mujaheed Tahir said that the Arewa Youth Forum is a conglomeration of youths with same mind from the 19 northern states. He said the AYF is uniting the youths in Northern Nigeria to ensure peace and unity are sustain as championed by the founding fathers of the region. He explained that they are achieving these through organizing seminars and symposiums to youths in tertiary institutions intrigue region.
He stated that the AYF preach against social vices such as cultism,  drug abuse, kidnapping, pre-marital sex, exam malpractice among others and encourage girl-child education.
Responding, Solomon Kumangari said he was overwhelmed with the words AYF described him. Adding that the crop of leaders in the AYF has proven that Nigeria  is producing vibrant and dynamic leaders who will take charge of the leadership of the country. He thanked AYF for finding him worthy for the award.
Kumangar said that Governor Fintiri has accorded youths and women positions in his administration and assured AYF that when ever there is opportunities more youth and women will be appointed.
He maintained that Governor Fintiri through his policies, is building a dynamic and formidable future of the youth, stressing the governor will not relent in his effort until he succeeded in leaving a legacy for the youths.
Solomon Kumangar assured them Governor Fintiri's support especially in the area of their fight against cultism, drug abuse, examination malpractice among others.
Contributing, the Press Secretary to Governor Ahmadu Umaru Fintiri,  Humwashi Wonosikou rated the award to Solomon Kumangar, deserveable. Promised that the administration of Governor Fintiri will work with AYF for the benefit of the youth.
14:15
Adamawa Daily Reports
News
Email ThisBlogThis!Share to TwitterShare to Facebook