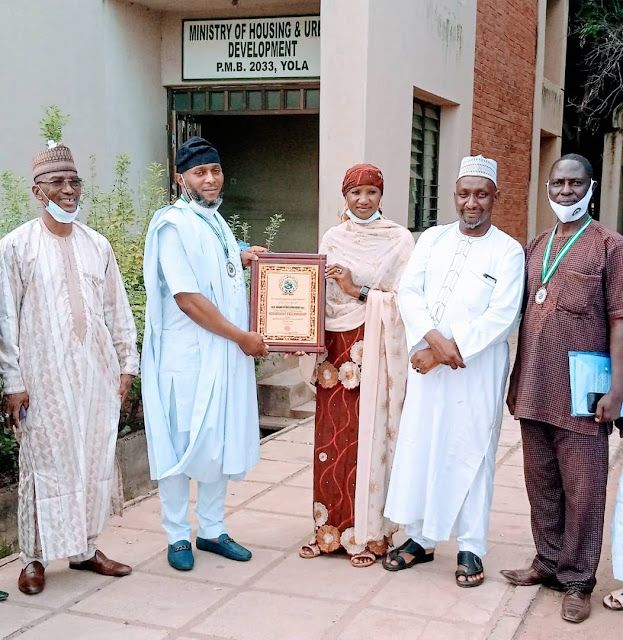 By Innocent Daniel Zira
07/08/2020
The Nigerian Institute of Civil Engineers has awarded  Hon. Adamu Atiku Abubakar, Commissioner for works and Energy Development with an Honorary Fellow of the Nigerian Institute of Civil Engineers after being satisfied with the conditions laid down in the memorandum and Article of the Association.
The presenter of the award who is the National Chairman of the Association, Engr. Aishatu Aliyu Umar stated that the Institution considered the Honourable Commissioner Worthy of the award based on his capability and competence in executing the on going developmental projects in the State and as well as his good relationship with Civil Engineers which he value so much.
The National Chairman further pointed out that Honourable Adamu Atiku Abubakar is a Capable Commissioner who is assisting Governor Ahmadu Umaru Fintiri in executing his plans of Urban renewal programme.
Honourable Adamu Atiku Abubakar in his remark thanked the Nigerian Institute of Civil Engineer for findinging him Worthy of the prestigious recognition and has promised to dedicate it to his team of Civil Engineers, the Permanent Secretary of the Ministry, the Deputy Permanent Secretary, Director Civil Engineering and all the Engineers that made him Worthy of the recognition.
16:27
Adamawa Daily Reports
News
Email ThisBlogThis!Share to TwitterShare to Facebook