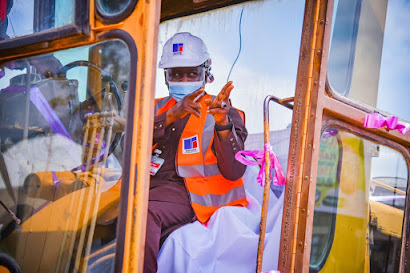 By Barnabas Augustine
15/8/2020
In continuation with road construction in Adamawa State, Governor Ahmadu Umaru Fintiri has flagged off construction of township road in Hong and assured completion of Pella-Maiha road.
Flagging off the road, Saturday at the Palace of District Head of Hong, the Governor said that declaring state of emergency on roads in the state was necessary so as to ease movement of people and goods, thereby improve their economy.
While assuring Hong community more dividends of democracy, Governor Fintiri stated that his administration will complete  Pella-Maiha road which was abandoned by the previous administrations.
He disclosed that his led administration will soon flag-off College of Education Hong campus road and complete renovation of Government Secondary School Hong.
He assured his personal supervision of the projects so as to ensure speedy completion and meeting the required standard.
Governor Fintiri enjoined Hong community leaders to persuade their people to give maximum cooperation to the contractors to enable them carried the construction work effectively.
Earlier in his speech, the Commissioner Ministry of Works and Energy Development, Alhaji Adamu Atiku said 3.2 kilometer road will be constructed at the European Quarters in Hong as part of the ongoing urban renewal programme of Governor Fintiri.
He said the contract was awarded to ROCAD and Co. Nigeria Limited at the cost of one billion, one hundred and fourty nine million, seven hundred and twenty six thousand, six hundred and sixty six naira, fifty one kobo  (N1, 149,726,606.51kb), with a duration of eight months.
The commissioner assured his ministry supervision to meet the standard of the road as contained in the contractual agreement.
Responding the representative of ROCAD and Co. Nigeria Limited, Engr. Jibrin Sa'id assured timely completion and qualitative construction work by his company while calling on the host community to accord them maximum cooperation.
In their separate vote of thanks, the chairman Hong Local Government Area Hon. James Pukuma and the District Head of Hong Alh. Umaru Babangida Mahmud applauded Governor Fintiri for his laudable projects going on across the state and especially for fufiling his campaign promise by flagging off Hong township road and other projects that will soon be flagged off in the LGA.
13:28
Adamawa Daily Reports
Email ThisBlogThis!Share to TwitterShare to Facebook