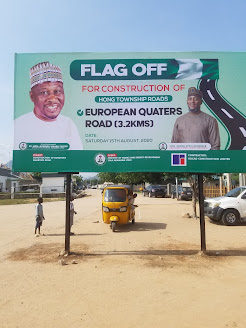 ByInnocent Daniel Zira
15-08-2020
As part of the Urban renewal agenda of Governor Ahmadu Umaru Fintiri, Honourable Adamu Atiku Abubakar,
Commissioner for works and energy development organized another  flag- off ceremony for the construction of three feeders European quarters road in Hong local Government area spanning to about 3.2 kilometers  with the contract sum of one Billion, One Hundred and Forty Nine Million, Seven Hundred and Thirty Six Thousand, Six Hundred and Six Naira, Fifty One Kobo ( 1,149,736, 606.51) to be handled by ROCAD construction Limited with eight Months completion period.
Earlier in his welcome address, Honourable Adamu Atiku Abubakar applauded Governor Ahmadu Umaru Fintiri for approving the road because it will ease the movement of goods and services in Hong Local Government particularly at those areas. He added that the project is coming at a better time considering the long period of neglect by the previous Governments.
The Commissioner also used the occasion to assure the Governor of the Ministry's commitment in giving the project and any other projects strict supervision to ensure that  quality work is achieved.
He knowledged the efforts of the Ministry's staff for their constant support and commitments towards achieving  successful flag-off ceremonies of all the intended projects.
While delivering his speech, Governor Ahmadu Umaru Fintiri stated that three roads linking some communities in Hong local Government area have already been completed by his administration, assured people of constructing College of Education road, Pella and the renovation of Government Secondary school Hong. 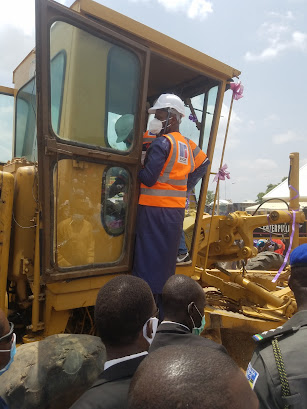 The Governor on the other hand noted that investing in road construction will enable the smooth movements of humans and goods so as to boost economic growth and he appeals for support from community people to the contractors.
On his part, Engineer Jibrin Saidu the Representative of ROCAD construction Limited expressed his appreciation to this administration for awarding them the contracts, promised to ensure quality work and timely completion.
On behalf of Hong community, Alhaji Babangida Mohmud the district head of Hong Local Government commended Governor Fintiri led administration for the work and demanded for reviving the Adamawa broadcasting corporation booster station to enable his people abreast themselves with happenings in the state.
In a vote of thanks message, Mr James Pukuma the Honourable Chairman Hong local Government reiterated support for Governor Ahmadu Fintiri in his Urban renewal programme and pray for a successful administration.
19:41
Adamawa Daily Reports
Email ThisBlogThis!Share to TwitterShare to Facebook