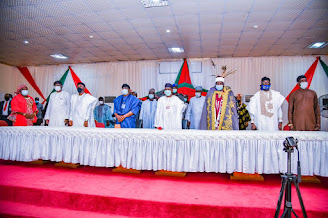 Governor Ahmadu Umaru Fintiri has told people of Bachama Kingdom to start preparing for confer of class of office by his administration to the new Hama Bachama, HRH Dr. Daniel Ismaila Shaga, Oon.

The Governor made this known when sons and daughters of Bachama Chiefdom paid him a courtesy thank-you visit at the Banquet Hall, Government House Yola.

Governor Fintiri described the emergence of the Hama Bachama as unique and act of God while explaining when he was at Lamurde for a condolence visit over the death of Homun Stephen Honest Irmiya, he charged the king makers to produced their best Hama Bachama that will harness both human and naturall resources so that the Bachama Kingdom can move forward.

He said that the kingmakers did not do any mistake in selecting HRH Dr. Daniel Ismaila Shaga.

“Today I want to state it here that they do not make any mistake. They have given me the exact and the perfect person” (Homun Daniel Shaga), Governor Fintiri said.

Governor Fintiri assured them that his administration will partner and give necessary support for Bachama Kingdom so that it will be a centre of peace, investment and development in Adamawa State.

He thanked Bachama Kingdom for being supportive to his led administration, having the kingdom being a share holder in his government while describing Bachama Kingdom a unique.

Governor Fintiri charged people of Bachama Kingdom to give the new Hama Bachama all the necessary support required to bring investors, peace and development to Bachama land while enjoining them to partner with Adamawa Government so that more development will come to them.

Earlier speaking, the leader of the delegation, HRH Homun Dr. Daniel Shaga said they were at Government House Yola to appreciate Governor Ahmadu Umaru Fintiri for his support, wisdom, courage and diligence in managing the affairs of Adamawa State, specifically for his care and concern for Bachama Kingdom.

He also thanked the Governor for identifying with Bachama Kingdom during the period of mourning their late king, Homun Stephen Irmiya Honest and for supporting the procedures involved in selection of the new king.

Adding that his present at Lamurde was conspicuous from beginning to the end and for having Bachama land in heart and mind.