Home » » Unlabelled » NEWS:Gov Fintiri To Resustate TVTC Across the State 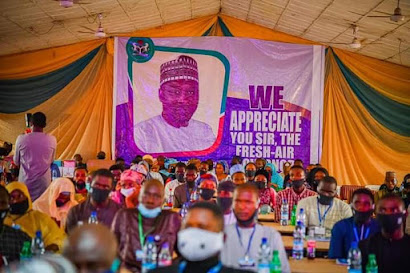 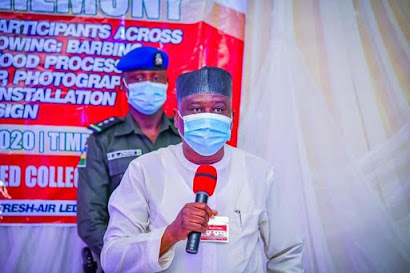 By Barnabas Augustine
17/8/2020
Adamawa State Governor, Rt. Hon. Ahmadu Umaru Fintiri has said his administration has concluded plans to resuscitate the Technical and Vocational Training Centres (TVTC) through out the state, so as to provide skills and talents required by manufacturing and services industries within and beyond the state.
The Governor disclosed this on Monday while flagging off skills acquisition training for youths under the auspices of Adamawa State Poverty Alleviation and Wealth Creation Programme (PAWECA) at General Murtala Muhammad College Yola.
Governor Fintiri noted that his administration is aware of the large gentry of educated unemployed youth who if left unemployed would perpetrate all form of criminalities.
Having realized this,  he said on assuming office he did not only resuscitate PAWECA and the Skills and Vocational Training Centres but even went further to create a Ministry of Entrepreneuship and Development to actualize this vision.
He maintained that his administration desired to take part into youth empowerment programme is to take the youth out of the vicious circle of poverty into which most of them were born.
"One of the very first achievement of this administration, which was minimizing the activities of urban criminals like the Shilla Cult Group, kidnapping and creating the enabling environment to discourage criminals and criminality", Governor Fintiri said.
"Among the very first steps were introduction of Free and Compulsory Education, Free Feeding and payment of scholarships in higher institutions, massive renovations and provision of new classroom blocks, all which has boosted enrollment and back to school initiative.
"This has reversed the decline to which the Educational Sector has sunk in the years preceding this Government.
" Today,  experts estimate that educational progress has increased by as much as fifty percent with commensurate increase in enrolment and literacy levels which were deplorable not quite long ago"
The Governor assured that under his watch no son or daughter of the poor Adamawa citizens will be deprived of functional education which will give each person a good start in life.
In his remark, the Honourable Commissioner Adamawa State Entrepreneuship Development, Iliya James said that two thousand youth were selected for the training across the state. Adding that  the training will be in batches with five hundred youth and women selected across the state for the kick off of the training.
Hon.James said that the beneficiaries will receive training in barbing, fish farming, poultry, food processing and preservation, makeup,  photography, soap making,  solar installation and website design.
Earlier, the head of PAWECA, Haj. Aisha Bako Bawa said that PAWECO was established in 2015 as an alternative to alleviate poverty in the state.
She explained that a bill drafted for making PAWECA an agency was sent  to the 6th Assembly of the state but it was not  passed. Until when Governor Fintiri came on board, resend the bill to the 7th Assembly. Stressing that the Governor assented to the bill on 20th June, 2020 and PAWECA becomes statutory established agency.
She thanked Governor Fintiri for supporting youth empowerment programme in the state while applauding him for sponsoring the training of 420 youth and women last two months in the state.
In their separate goodwill messages, the representatives of Lead British Council Yola Office, National Directorate of Employment and National Youth Council North East applauded Governor Ahmadu Umaru Fintiri for reviving youth empowerment programme, describing him "Master Project Man".
They thanked him for providing job opportunities for the youths while charging them to judiciously make use of the knowledge they will acquire at the training and enjoined the state Government to revive all the farming skills acquisition centres across the state.
00:48
Adamawa Daily Reports
Email ThisBlogThis!Share to TwitterShare to Facebook