Home » » Unlabelled » NEWS: State Government Condole the People of Shelleng Over Demise of one of their Own.

NEWS: State Government Condole the People of Shelleng Over Demise of one of their Own. 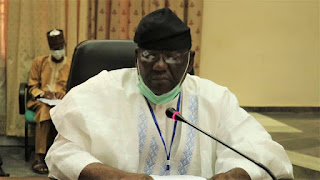 The Deputy Governor of Adamawa State, Chief Crowther Seth was at the palace of  the Amna Shelleng Dr. Abdullahi Isa Dasong ll to condole  him over the demise of his brother Abubakar Isa Dasong and Wife who died in a ghastly motor accident along Kiri-Shelleng road recently.

While commiserating with the traditional council of Shelleng on behalf of Governor Ahmadu Umaru Fintiri, the deputy Governor said the death of Abubakar Isa Dasong was a great lost not only to the people of Shelleng, but the entire state. Chief Crowther  however, encouraged the Amna Shelleng and the entire family to take solace in God noting that death is inevitable. He thereafter prayed God to grant the deceased eternal rest and the family the fortitude to bear the lose.

The Amna Shelleng Dr. Abdullahi Isa Dasong ll appreciated the state government for identifying with them  in  their moment of grief, he emphasized that the late Abubakar Isa Dasong died at a time his services in Shelleng traditional council is needed the  most.

Late Abubakar Isa Dasong until his death on Saturday 19th September, 2020 was the Acting District Head and Walin  Shelleng.

The Deputy  Governor was in the company of Hon. Members representing Demsa Local Government in the State House of Assembly Kate Raymond Mamuno with her counterpart Japhet Kefas of Gombi and that of Shelleng Abubakar Isa,  Hon. Commissioners among other Government officials.

Earlier, the deputy Governor was in Guyuk to witness the cultural dance organized by Guyuk traditional council between Wana and Lunguda to Foster peace and unity among the diverse cultural groups and by extension preserve their identity for a harmonious coexistence.