Home » » Unlabelled » NEWS:ALGON ADAMAWA STATE TO COLLABORATE WITH THE AGENCY FOR MUSEUMS AND MONUMENTS TO ACHIEVE PLANS.

NEWS:ALGON ADAMAWA STATE TO COLLABORATE WITH THE AGENCY FOR MUSEUMS AND MONUMENTS TO ACHIEVE PLANS. 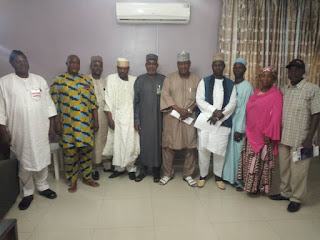 The Director General Adamawa State Agency for Museums and Monuments, Alh. Abdullaziz Usman Duhu, alongside some consultants visited the ALGON Chairman Adamawa State Hon. Jingi Rufa'i Kwaja and his management staff , to deliberate on the Agency's plans of discovery and identifying of historical artifacts in Adamawa state.

While delivering his message, the DG. Stated his plans to embark on a wide State discovery and identification of historical sites and cultural artifacts in all the twenty on (21) Local Government Areas of Adamawa State in view of creating a State Museum Center that will have a pavilion and amusement park that will displays the artifacts of each Local Government.

Furthermore, our Agency have the mandate of the Governor to construct State Museum Center, which is privately driven, in view of this," I went  to Abuja and met with a private investor from Singapore, and the meeting was successful, the investor agreed to come and invest in Adamawa State" he said.

In their separate remarks,  the Agency consultants  briefed the Chairmen on the benefits and merits of having historical sites in their Local Government Areas.

The Consultants stated that, the essence of creating a Museum is to develop an eco tourism site, in the State and to do that, will involve various components of activities, that have to do with discovery and identifying things that are of tourist value, document and present them at different forums, because if tourist don't know what you have in your environment, they will not be attracted to come .

Furthermore, Adamawa State have so many historical sites that have been identify but have not been documented and declared as a monument that is why the Agency wants to see how this potentials can be processed and work for the benefit of our State and Local Government Areas.

They concluded by saying, the essence of what the Agency intends to do is to identify this sites and artifacts, package them and present them at the National and International level with the cooperation of each Local Government Areas.

Responding to the visit, the ALGON Chairman Hon. Jingi Rufa'i Kwaja appreciated the DG on behave of the Local Government Chairmen, he also assured to give the DG an enabling environment and to also collaborate with the Agency for the benefits of the people, the State and the Local Governments.