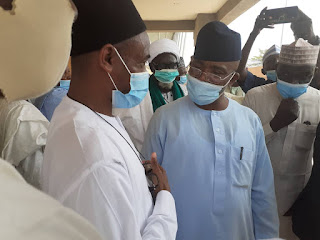 By Zaliha Hammanjoda Fari
The Executive Chairman of National Hajj Commission Of Nigeria (NAHCON) Zikrullah Kunle Hassan and his entourage have arrived the State capital today to inspect their ongoing Hajj Development Levy project adjacent Yola International airport.
However, the Chairman was recieved by the Executive Secretary of the State Muslim Pilgrim Welfare Board  Commission, Mal Abubakar Salihu and the management Staff of the Commission.
In a remark, the Chairmanof NAHCON commend the contractor of the ongoing  project, and gave him a grace of two months to complete his work.
On the other hand, Mallam Abubakar Salihu  expressed his gratitude to the Management of NAHCON for the gesture and appeal for a speedy completion of the project. 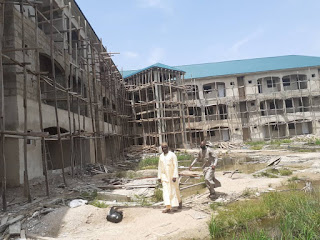 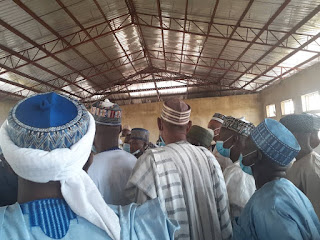 The ongoing projects include; a Hotel structure that will serve as camp for Pilgrims during Hajj operations, a screening Hall before Pilgrims take off, as well as a Jummat mosque Pilgrims and eenvirons.
10:56
Adamawa Daily Reports
Email ThisBlogThis!Share to TwitterShare to Facebook