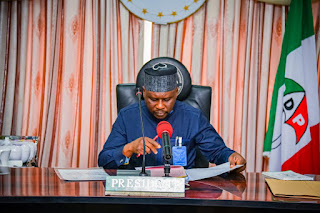 By Barnabas Augustine
23/9/2020
Adamawa State Executive Council has approved over two-hundred and fifteen million naira for construction and renovation of Mubi General Hospital.
The EXCO has also approved Adamawa State medium term expenditure framework and fiscal strategy paper for the year 2021.
Briefing newsmen, Wednesday after the meeting that was presided by Governor Ahmadu Umaru Fintiri at the Council Chambers, Government to House Yola, the Honourable Commissioner Ministry of Information and Strategy, Dr. Umar Garba Pella said “Adamawa Executive Council has, at its thirteenth meeting of the year 2020 approved the sum of two hundred and fifteen million, twenty seven thousand, nine-hundred and seventy naira (N215,027,270.00) for the renovation and construction of some sections at the Mubi General Hospital.”
According to the Commissioner, the work will include renovation and construction of Out Patient Department (OPD), Laboratory and Maternity blocks in General Hospital Mubi.
He said, the construction and renovation of the OPD was awarded to Danwaziri Global Services Limited at the cost of fifty nine million, nine hundred and eighteen thousand four hundred naira thirty eight kobo (N59,918,400.38k) while the contract for the construction of Laboratory block will be carried out by North Global Management Limited at the cost of sixty one million, one hundred and twenty three thousand, eight hundred and twenty seven naira (N61,123,827.00kb) and the construction of the maternity block was awarded to Shakai Suwiyila Nigeria Limited at the cost of seventy four million, seven hundred and twelve naira, six hundred and thirty naira fifty eight kobo (N74,712,630.58kb).
Honourable Pella said bidding for the contract has already been conducted and the contractors will immediately mobilise to the sites for the renovation and construction work.
The Information and Strategy Commissioner stated that Adamawa Executive Council has deliberated on the State medium term expenditure framework and fiscal strategy paper for the year 2021.
According to him, the Strategy Paper will be used to guide the state in its budget and provide the right compass for the preparation of 2021 budget.
He explained that the state has started preparation for the year 202 budget hence, the approval of the paper which will be laid on the floor of the Adamawa State House of Assembly for deliberation in consonant with global best practice in budget preparation. 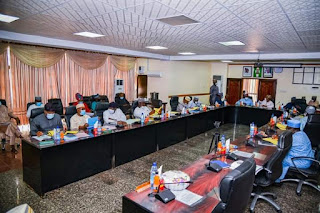 Adding, while working on the strategy paper, the council took consonant with the global economy which has been affected marginally by coronavirus pandemic.
He maintained that the council has made projection with a hope the state will sustain the development the present administration started and ensure it executes its responsibilities as Government.
According to Dr. Umar Garba Pella, the Council has also critically evaluate the state internally Generated Revenue  and factored how it can be improved upon, to be able to give the required revenue, to sustain the development of the state.