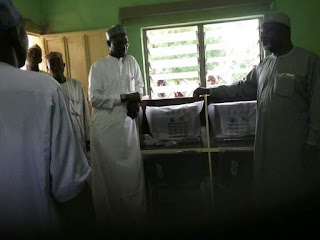 He was there to inspect the 50 computers that were given to the Schoolarship Board by the Mewar University of India due to the cordial relationship existing between them.

These computers if given support by the State Government  would alliviate  many problems most especially during jamb, waec and any other examination that would have to do with computer most especially now that we are in the dital world.