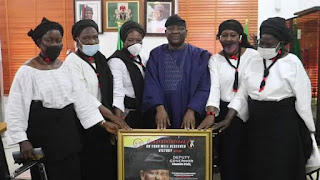 They made the call while on a courtesy visit on the deputy Governor, Chief Crowther Seth to congratulate him over his emergence as the number two citizen of Adamawa State.

Chief Crowther Seth received the women wing led by the National President, Mrs Irene Hamadu at his office. Mrs. Irene Hamadu appreciated the fresh air and the workaholic Governor Ahmadu Umaru Fintiri for selecting one of their own as his running mate, even as they pledged their commitment to support the administration.

They however, wished the present Government another tenure to enable them accomplish their developmental drive in the state.

Pene Da Bwatiye Women's Wing further maintained that Bwatiye land is fully aware of the developmental strides of the present administration, promising to canvass for more support as the fresh air Government is committed to leading the people of Adamawa to the state of their dreams.