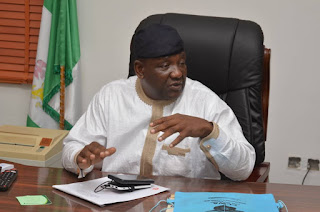 The Deputy Governor, Chief Crowther Seth reassured Government's support to Bachama Kingdom in their quest to achieve peace in the land.

The Deputy Governor congratulated the celebrant on behalf of Governor Ahmadu Umaru Fintiri saying Government is happy to identify with the new Hama Bachama and the entire Kingdom, stressing that his enthronement was destined by God.

He said security is one of the top priority of the present administration, and pledged Government's support in restoring peace in Numan and its environs.

The Arch Bishop of LCCN and the President, Lutheran world Federation, Most Rev. Musa Panti Filibus said his appointment as Hama Bachama  came at a time the domain and the country is confronted with challenges of insecurity, but wished Homun Dr. Daniel Ismaila Shaga well and prayed for wisdom, knowledge and understanding to lead the people with  justice, equity and fairness.

In a sermon, Apostle Ayuba Matawal emphasized on the importance of Thanksgiving, and encouraged the congregation to give thanks to God in any situation as its attract abundant blessings.

The Apostle reminded the gathering that prayers and Thanksgiving is the answer to all problems as according to him guarantees peaceful living and multiplication among others.

The new Hama Bachama expressed gratitude to God, saying without him his enthronement could not have been possible. He also extend appreciation to the people of the chiefdom and beyond for their support and contributions.

He thereafter, reiterated commitment to pursue peace, safety, unity and prosperity in Bachama Kingdom without fear, in line with the good foundation laid by his forefathers and ancestors.

Other speakers in their separate remarks described Homun Dr. Daniel Ismaila Shaga as an upright person capable of leading Bachama people to the promised Land.

Prominent Religious leaders, Politicians and Traditional rulers from far and near graced the occasion.