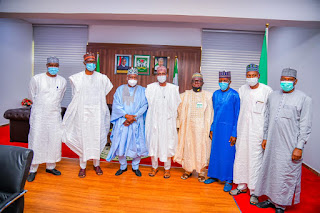 Governor Ahmadu Umaru Fintiri has assured President Muhammadu Buhari his full support to stabilise Nigeria following the #ENDSARS protest across the country that was hijacked and desteoyed public and private structutes by hoodlums.

The Governor made the assurance while receiving the Federal Capital Territory Minister on a courtesy visit in his office at Government Yola.

Worried by #EndSARS protesters hijacked by hoodlums in some section of Nigeria, Governor Fintiri said that he sees the Minister’s visit as a solidarity one.

The Governor said in Adamawa youths have behaved in the most dignified manner in the #EndSARS protest, saying the youths had their share of the demonstration and the match pass, taking the State and the nation into most larger consideration. He noted that North East has suffered more than any region in terms of insecurity and other vices of crimes and criminalities.

Governor Fintiri explained that the youths gave him a memo for onward transmission to the President, in which the youths expressed their worry on the extrajudicial misbehaviour of the disbanded Special Anti Robbery Squad of the Nigeria Police and call for its reform. He said the youth also expressed their worried that North East can not be left without  enough security considering the insecurity in the region in particular Adamawa State.

He said the youths demanded for the reform of the SARS, equipped them with sophisticated weapons to fight insecurity in more civilised way and fill in the gap military can not cover in North East.

He lauded the youths in Adamawa for their well behaviour while assuring his administrations support to brighten their future.

Governor Fintiri condemned the destruction of private and public properties by hoodlums, while noting the constitutional right of citizens to protest, but in civilised way.

He said that in Adamawa State his administration has swung into action: working with all youth organisations to create atmosphere of understanding with them, educate them and Constituted Judicial Panel of Enquiry on SARS extra judicial behaviour so as to give justice to victims.

The Governor added that his Government has had an expanded security council meeting including security commanders, traditional rulers, religious leaders and Local Government chairmen among others and discussed extensively on the need to educate the youths on the consequences of the protest across the country. This the Governor said has helped to calm the youths in the State.

In his remark, the Minister Federal Capital Territory, Muhammad Bello said he is at the Government House Yola on a visit to show his respect and reciprocate the gesture of Governor Fintiri meeting him in Abuja.

The Minister who was accompanied by his team added that following the protest of #EndSARS demonstrations across the nation as well as the outcome he sees the need to come down to his State Adamawa to intimate Governor Fintiri on the FCT shared experience.

He commended Governor Fintiri for his ability to manage the crises effectively in Adamawa, having the Governor been in the National Economic Council Meeting that discussed how to resolve the agitation of the protesters.

The Minister appeal for the unity of the people of the State irrespective of their differences to revive the economy which has been affected by COVID-19 and recently the attack by hoodlums in some sections of Nigeria.

He lauded Governor Fintiri for engaging on number of issues that is stabilising the state.