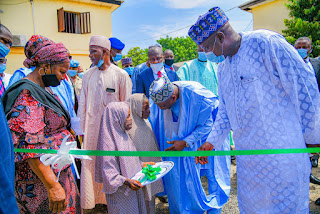 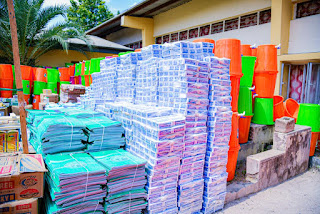 Performing the ceremony, Friday at the Conference Hall of the Adamawa State Universal Education Board (ADSUBEB) in the state capital, Yola Governor Fintiri said the focus of his administration has remain on rehabilitation and construction, enhancing performance and learning, human capital development and recruitment, quality assurance and standards with educational planning and management. 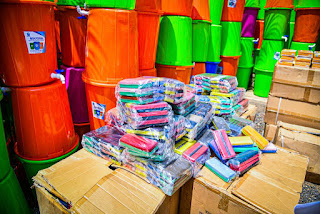 He stressed that providing quality education to the young people for nation building remain his Government topmost priority.

“We have also embarked on a deliberate policy to provide 20 thousand sets of desks and chairs, computers and Internet facilities in 9 schools in the first phase”.

The Governor appeal to Parents and Guardians to see the education of their children as a necessary obligation, and not abandon their responsibilities to Government and Teachers. Calling on parents to do their part as children look up to leaders and parents for direction.

Governor Fintiri thanked UNICEF, PLAN International and other donor agencies for helping to close the infrastructure gap in the education sector in the state through providing access to quality education.

In his remark, the Executive Chairman, Adamawa State Universal Basic Education Board, Dr. Salihi  Atique lauded Governor Fintiri for having especial basic education as his number one priority, effecting construction and renovation work on public schools across the state.

This he said, in addition to payment of 1.5 billion naira counterpart funding. He stated that the money is already in the board’s account awaiting similar lodgment when Universal Basic Education Commission paid it’s matching grant.

He also praise Governor Fintiri for his administration taken the responsibility of acquiring instructional materials for public schools. Saying in the past, Parent Teachers Association and School Base Management Committee  were shouldering the responsibility of buying the materials for their respective schools. He noted the materials acquired will sustained Governor Fintiri’s free policy on education.

Contributing, the Honourable Commissioner Ministry of Education and Human Capital Development, Wilbina Jackson enjoined all the twenty Local Government Areas Education Executive Secretaries to ensure that the materials distributed are used for the purposes it was purchased for.