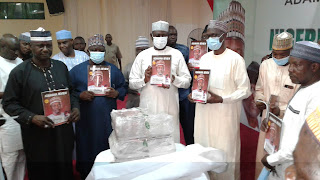 Governor  Ahmadu Umaru Fintiri  have unveiled  a magazine  " Adamawa  Review " a publication  by the  Ministry of Information and Strategy with a  called on the  Media  Executives to support the present administration  in its  quest to bring development  in the state.

The Governor stated this while hosted  Media  Executives in the state  to a dinner  and unveiling of a magazine published  by the  State Ministry of Information and Strategy.

Represented by the Secretary to the Adamawa State Government  Engineer  Bashir Ahmed, the Governor thanked  the  media Chief Executives for their support and cooperation being giving to his administration  and urged to  maintain the  tempo, pointing out that the  publication well  remind  the future  generations  the commitment of the  Fintiri  led Government  by instituting  a solid foundation for the development of  Adamawa State.

According to the SSG, Government  is very concerned  on the publicity being giving by all the  media  outfits in the state.
He maintained that the  Magazine is a  Document to be  remembered after the administration of Fresh Air  Government.

Earlier in his  address  of welcome, the Honourable Commissioner Ministry of Information and Strategy Comrade Umar Garba pella said the rationale  behind organising  such a Dinner with  the  media  Executives  and to  present  a Documented compendium of Governor  Ahmadu Umaru Fintiri  administration  achievements  since  it assumed  office  from  29th  May, 2019  to 29th  May, 2020.

The  Information Commissioner stressed that the  present Government under Governor  Ahmadu Umaru Fintiri  want to  keep its electorates  abreast of the activities of the Government  policies and programmes, pointing out that the  Magazine will  also  serve as a  research  material and a Document with  which posterity can judge the  Government in the  future.

Also in  a vote of thanks on behalf of the  Media  Executives,  the  Managing Director of  Gotel Communications  Alhaji  Muhammad  El- Yakub  said  media  outfits in the state  are ever  ready to work with the Government  to ensure the  enthronment  of good  governance.

He however  reiterated  that  media  Chief Executives  have a duty  bound to the  development of Adamawa State.