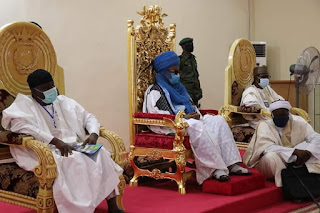 Six new District Heads have been turbaned by Lamido Adamawa Dr. Muhammadu Barkindo Aliyu Mustafa with a call on them to exhibit the spirit of sportsmanship in the discharge of their duties.

The turbaning took place at the Lamido's palace Yola, in the presence of the Deput Governor, Chief Crowther Seth who was there on behalf of the State Government.

The Lamido Adamawa, Dr. Muhammadu Barkindo Aliyu Mustafa charged them to shun any form of differences, rather promote equality, peace and unity.

He also reminded them that everybody must give account of his or her deeds, hence the need for them to fear God and ensure justice and fairness prevails in their localities.

The Paramount ruler further tasked them not to justify the confidence reposed in them.

On behalf of the celebrants, the District Head of Nyibango, Abubakar Jika appreciated the Emirates Council and the people of their communities for finding them worthy for the job, and promised to exhibit a sense of maturity in their leadership.

Other traditional rulers and title holders, politicians among other top government functionaries from far and near graced the occasion.