NEWS: State MoWA, CSOs... Advocate Against GBV in the State. 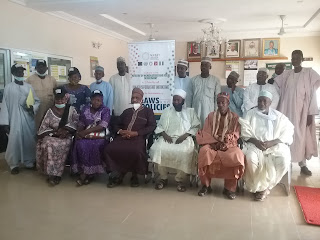 The Hon. Commissioner, Ministry of Women Affairs, represented by Dr.  Mrs. Anna Alahira, informed the Muslim Council that the aim of the visit is to seek for  cleric's spiritual support in the fight against gender based violence as a strong pillar in society.

The Dir. Lamented that women are suffering in silence, some are being traumatised while others suffer from mental illness as a result of either rape, wife battering, or sexual harassment. She maintained that it is on this note that, the Ministry in collaboration with C.S.O’s and SPOTLIGHT INITIATIVE, felt they cannot fold their arms and see women and girls suffer from GVB any more. Adding that, all hands are on deck to ensure protection of women and girls righta. She solicited for the religious organisations support to end GBV.

She announced the latest development of a laboratory established in the state with forensic machine, where  experts collect samples and detect perpetrator of rape which is a plus in tackling  the dreaded menace of GBV.

The Chairman, Muslim council, Mal. Gambo  Jika, commended the team for protecting rights of women and girls, promised his support, welcomes any development as far as it does not contradicts Islamic laws and pledge to disseminate the messages to his followers. Mal. Gambo, added that, Muslim Council is fully in support of passing Bill on child rights act because it will go along way in saving children from exploitation. He also, stated that prayers are on going in mosques seeking for God’s intervention on the global pandemic of rape.

In their separate remarks, Sheikh Ahmed Tijjani Tahir and Modibbo Muhammad Jingi, said “Islam has accorded a Muslim woman equal rights as that of a man. The clerics condemn high rate of divorce in society which lead to broken homes and  improper upbringing of children, adding that divorce is condemn in totality in Islam.

In the same vain, the crew further paid an advocacy visit to the ward Head of Alkalawa / Ajiya ward, Mai Anguwa  Umaru Hammanjoda Furo,  seeking for his fatherly support to enlighten his subjects on effects of GBV most especially rape. The coordinator, SPOYLIGHT INITIATIVE, Mrs. Christy  Power, informed the ward head that soon a one stop centre will be established in the state which will serve as a referral centre for victims of GBV for service providers support. She said a free medical, legal and psycho social support will be given to survivor of GBV and after rehabilitation, the victim will undergo free small scale business  training of his/ her choice.

Mai Anguwa Furo, pledged  his support and promised to inform religious leader under his domain to pass the message to their followers.