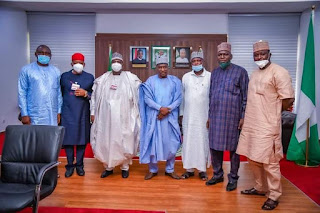 Governor Ahmadu Umaru Fintiri of Adamawa said that under his administration, teachers will receive their reward here on earth for the services they are rendering to citizens.

The Governor disclosed this, Tuesday while granting audience to Nigeria Union of Teachers, NUT delegation at his office in Government House, Yola.

Governor Fintiri said that his administration has sponsored a bill and was assented for extension of the year of service of teachers to fourty and sixty five for retirement age. Adding that before the Federal Government announced its implementation last week, Adamawa State teachers are enjoying the increase of year of service for the past four month.

He stated that his administration has renovated and built new classrooms, furnished them and procured learning and instructional materials for both students and teachers.

Governor Fintiri noted that the development recorded in education sector by his administration was as a result of his Government partnership with key stakeholders in the sector including NUT.

He assured to sustain the cordial relationship with the Labour as well as the NUT to take the state education sector to the expected level.

Earlier in his remark, the National Chairman, Nigeria Union of Teachers, Dr. Idris Nasir said they were in Government House Yola to thank Governor Ahmadu Umaru Fintiri for what he has being doing in the education sector, up to date prompt payment of monthly salaries to NUT members amidst COVID-19 that is affecting the economy of the world, hindering other States from payment of salaries and for the laudable achievements he is recording across the state.

The National Chairman who was in the State for NUT delegate conference, lauded Governor Fintiri for renovating and building about five thousand classrooms across the State despite its lean resources. He noted, the Governor achieve this because of his financial management and prudent. 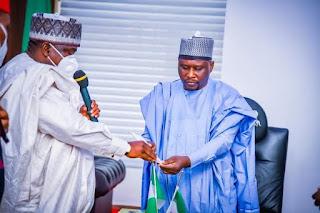 Highlight of the visit was presentation of commendation letter to Governor Ahmadu Umaru Fintiri for the achievements he recorded in the education sector.