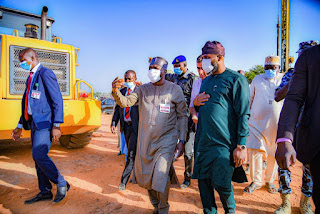 In other to ensure contractors handling ongoing road projects across the state meets to standard and time frame, Governor Ahmadu Umaru Fintiri inspected the projects in the State capital.

The Governor was taken round the construction sites by the Commissioner Ministry of Works and Energy Development Hon. Adamu Atiku Abubakar.

Responding to questions from news men after the inspection, Governor Fintiri said he is satisfied with the ongoing road project, having the contractors are progressing as expected.

The Governor explained that due to the progressive level of the construction work in the state, the State Executive Council has approved two billion naira upward review capital expenditure for Ministry of Works and Energy Development.

He disclosed that the road construction in the state is beyond the expectation of the time line that has been approved for the contractors.

“...Commensurately also the money that need to be paid because of the valuation certificate has to also beat time; we approved two billion naira so that we meet up some of their certificate which are coming in, to deploy more equipment, resources and the job is ahead of time”, Governor Fintiri said.

“Some of the bridges and roads that are suppose to be completed in eighteen months, but less than five months they are almost going sixty to seventy percent”.