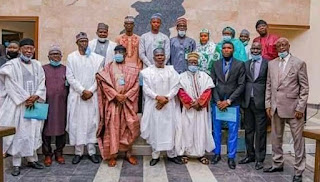 Governor Ahmadu Umaru Fintiri has sworn in Judicial Panel of Enquiry for alleged disbanded Special Anti Robbery Squad (SARS) brutality and other related extra judicial killings in Adamawa  State. The panel is to submit its report with a maximum duration of six months from the day the members are sworn in.

Performing the ceremony, Thursday in Conference Hall, Government House Yola, Governor Fintiri said inauguration of the committee came as a result of the nationwide protest against brutality of the disbanded SARS by the Federal Government.

He said that the National Economic Council has directed all State Governors to establish Judicial Panel of Enquiry to chaired by a reputable retired Justice of a High Court.

Governor Fintiri explained that the Council has also approved the setting up of a Special  Base Security and Human Right Committee to be chaired by a Governor and Human right committee to supervise the newly formed Special Weapon and Tactical Unit of the Nigeria Police in the various states. Adding that the team will be established by special committee on human right.

Governor Ahmadu Umaru Fintiri gave the terms of reference to the Panel thus:

1. To receive and investigate complain of Police brutality or related extra Judicial killings.

2.To evaluate evidence presented and other surrounded circumstances and draw conclusions as the validity of the complain.

3.To establish the nature of the abuses.

4.To establish whether or not there are individuals in custody as a result of these abuses and how many of them are held and the reason(s) why they are kept.

5.To establish whether or not those in custody have been arraigned in court of competent jurisdiction and how many of them are yet to be arraigned.

6.To establish how many people died in custody.

7.To establish incidences of financial and material extortions, listing the amounts and the kinds of materials involved.

8.To establish any damage(s) caused by person or group of persons.

9.To determine any compensation to be paid  for those damages to the victims or their relations and other remedial measures where appropriate.

Responding, the chairman of the panel, Justice Adamu Hobon (Rtd) thanked Governor Ahmadu Umaru Fintiri for finding them worthy to appoint them to serve as Chairman and members of the Judicial Panel of Enquiry for the disbanded SARS brutality in Adamawa.

He assured the general public not to disappoint the confidence repose in each of the member and they will carry out the assignment in line with the terms of reference given to them.

He noted that the general will set their eyes on the committee in performing their assignment, thereby calling on the general public to appear before the panel to testify from their personal knowledge and not what they imagine in their mind or carry out sentiment into their testimonies and charged the media to report correctly the activities of the panel when necessary.

Justice Hobon solo cited for support from the general public to enable the panel carryout the task ahead of it to the later.

Other members sworn in include:

Oath of allegiance and office was administered by Adamawa State Attorney General and Commissioner of Justice, Barr. Afrainu Jingi.