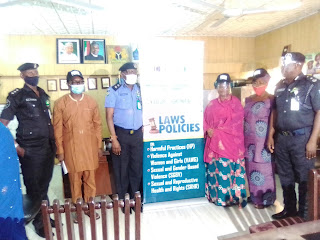 The Commissioner of Police, Mr. Olubenga  Adeyendu, have vowed to end rape cases in Adamawa state.

This was revealed by the C. P  when he received the Hon. Commissioner, Ministry of Women Affairs   and Social Integration, Mrs. Lami Ahmed Ga’anda who led a team of Gender Based Violence working group for an advocacy visit  to his office Tuesday, 29th September.

The Commissioner for Women Affairs lamented that recently, over five hundred ( 500) cases of rape were reported to health facilities in the state , adding that women and girls are mostly at the receiving end.

Mrs. Lami, called on the Nigerian Police to support the fight against all forms of gender based violence (GBV).

She further stated that they are ready to work In synergy with the Police, provide training and capacity building to Police Officers on issues relating to gender based violence and how to handle survivors of GBV, how to collect  and report forensic samples/ evidence.

Lami, further stated that a forensic lab have been established to aid DNA analysis and determination of evidence to aid criminal investigation in the state.

Highlights of the visit was presentation of barner that contains Laws and policies on harmful practices supported by UN-EU SPOTLIGHT INITIATIVE.