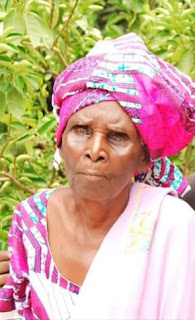 Mama Helina died in Lamurde today  after clocking a celebrated age of 118. Although the Deputy Governor's mother has been suffering some old age related ailments, she passed on in her sleep in the wee hours of the morning.

Mama Helina will be fondly remembered as a person who defied death at some point because on several occasions  she has been  rumoured to have died only to be seen the next day looking cheerfully.

The Deputy Governor in his bereavement says no matter the number of years spent on earth, one cannot quantify the feeling of having a living mother but since death is inevitable, we can only resign to fate and accept the will of  Almighty God over our lives.

Mama Helina who is survived by her Children , grand and great grand children will be buried in Lamurde on  Saturday 17th October 2020 according to Christian rites.