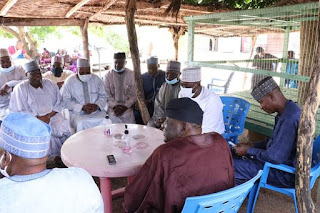 As sympathizers troops the private residents of  Deputy Governor  Adamawa state, Chief Crowther Seth to condole him over the sudden demise of his mother Mama Metusudo Helina Seth who died at the age of 118

Among early arrivals are top Government functionaries, friends , associates  and relatives who described the as a monumental lost not only to family but to the state at large

Hon. Attorney  General and Commissioner for Justice, Barrister Afraimu Jingi led a delegation of the Members of the Adamawa State Executive Council for the condolences visit.

He stated that attaining the age of over a hundred by mama is a reason to celebrate and further urged family members to emulate the good life she lived.

Leading a group of Media Managers in the State, the Hon. Commissioner for information and Strategy, Dr Garba Umar Pella urged the Deputy Governor and his family members to summon courage to bear the irreplaceable lose as death is inevitable.

The CAN Chairman Adamawa State, Bishop Stephen  Dami Mamza who led the delegation of Christian Association of Adamawa State described Mama as a peace, loving, caring and God fearing woman who passed on at the right age.

The Bishop also sent their heartfelt condolences to the family, the government and the good people of Adamawa State and prayed God to grant the deceased internal rest and family the fortitude to bear unbearable lost

Meanwhile, the burial of Mama Metusudo Helina Seth has been scheduled to take place on the 17th October 2020 as he continue to receive sympathizers and mourners at home.

Other dignitaries who came to pay their last respect to Mama include, Hon. Commissioners, Chairmen, variouse Groups, the Permanent Secretary , Deputy Governor's Office Alh. Aliyu Umar Toungo among others.