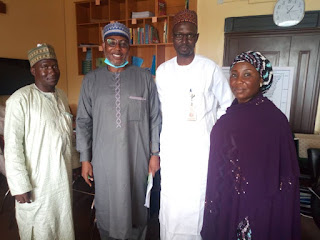 The Director General Adamawa State Agency for museums and Monuments Alh. Abdulaziz Usman Duhu, and his management staff met the Secretary to the State Government Adamawa State Engr. Bashir Ahmed to brief him on the achievement and plans done so far since his assumption into office and the constraints  faced by the Agency.

While delivering his massage, the Director General stated that since inception into office, the Agency was in a stage of devastating, but during his hundred days in office, he was able to equipped and renovate some offices and also train some staff of the Agency on video and photography.

The Director General said that the Agency has moved ahead to document two historical sites; the Three Sisters Rock in Song Local Government and the Elephant House in Guyuk Local Government  and equally the German Cemetery Located at Dougerie Yola North Local Government Area, which is now in the final process of declaration as a State Monument.

He further said, some consultants were appointed and review committee was constituted, under the chairmanship of the Provost College of Education Hong Dr. Pongri Johnson to review the documents on the three Sisters Rock and the Elephant House.

In view of the developmental stride of this Administration, the DG plans to create  a State Museum Center which will be privately driven  and he demanded the collaboration of Government and private partners.

In view of that, Alh. Abdulaziz Usman Duhu  had a meeting earlier with a private partner from Singapore in Abuja and discussed on a way forward, the meeting was fruitful.

Similarly, the Director General had a partnership agreement and discussion with the leadership of the twenty one (21) Local Government Council on his propose plan of constructing a State Museum Center and the discovery, research and documentation the Agency will soon embark on, in the Local Government Areas.

The Director General states the following Agenda he wants to achieved as thus; to undertake a State wide research and discoveries in collaboration with the Local Government Areas so as to discover artifacts of the State, to produce a comprehensive Brochure where all the identified artifacts will be documented, to construct a Palace Museum in Ganye, Numan and Guyuk Local Government Areas and lastly, to market and exhibits all the artifacts collected.

Moreover,  discovery, research and documentation are the main function of the Agency, and the Slogan says "Museum is our history, while Monument our pride."

In conclusion, the Director General requested for vehicles to carryout assignment, provision of office equipments, such as computers and additional running cost in order to maintain the office properly.

Responding to the Director General, the Secretary to the State Government Engr. Bashir Ahmed congratulated the DG on his effort of bringing the Agency back to life.

He further, applaud the slogan of the Agency, " Museum our history, while Monument our pride, a society that is not proud of his cultural endowment is lost, he  urge the Agency to avail other cultural heritage, so that the Society can understand how best our cultural artifacts in our  communities are. Similarly he said, Adamawa State has a quite number of cultural artifacts, in which if it's properly harnessed and place in the right place will open more windows.

He assured of the Government's support to assist the Agency when the economy of the State improves.