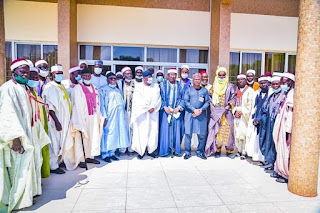 Governor Ahmadu Umaru Fintiri has received District Heads Forum of Numan Federation on a solidarity visit over the recent destruction of public and private properties by hoodlums.

Receiving the District Heads, Saturday at his residence in Government House Yola, Governor Fintiri thanked the traditional and religious leaders in the State for condemning the activities of the hoodlums in the State.

He said the hoodlums were not only youths, they cut across age and gender, including breastfeeding mothers.

The Governor said that what was committed by the hoodlums is an offence against the State. However, revealed that having the perpetrators asked for forgiveness the Government has considered their request and pardoned them.

Governor Fintiri said his administration has allotted  considerable amount in the 2021 appropriation budget for youth, women as well as adults empowerment programmes.

He call on people of Adamawa to support his administration in stabilising and build the State to greater height. Noting, the insecurity the State has suffered, including kidnapping , armed robbery, banditry, insurgency among others has led to slow paste of development of Adamawa.

In his remark, the spokesman of the delegation, the District Head of Mbula Chief Afraimu  Fwa said they were in Government House Yola for a solidarity visit over the recent loots on public and government properties by hoodlums.

Chief Fwa thanked Governor Fintiri for according traditional rulers in the Numan Federation special care and privilege which in the past was not given to them.

The spokesman assured Governor Fintiri their unflinching support to succeed in his administration, noting the gigantic projects ongoing across the state that is taken Adamawa to greater level.