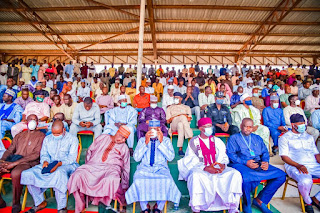 Following the recent destruction of public and private properties in the Adamawa State by hoodlums, thousands of youths have staged a solidarity rally to Governor Ahmadu Umaru Fintiri.

Governor Fintiri who was delighted with the movement organized by the youths in the state, Saturday at the Mahmud Ribado Square in the State Capital, regretting the destruction of properties in the State said he considered the rally as an important milestone in his administration’s search for a new direction on the path to peace and sustainable development, initiated by the youth.

“We stand together as inseparable allies, even as I thank you for identifying with us always” Governor Fintiri said.

“We are meeting here at a critical moment for Nigeria and Adamawa State in particular therefore let us work tirelessly for the standard we are building.

“Even though we are in an age where change is happening so rapidly, your generation is the one that can bring about   peaceful change in the society”.

Governor Fintiri challenged the youths to take advantage of the reforms his administration has initiated aimed at giving young people the relative advantage to compete with their peers anywhere in the World by laying the groundwork for a more sustainable and inclusive economy despite inheriting a dire economic situation.

The Governor revealed some laudable programs his Government has initiated.

“This administration has concluded a plan to launch a new investment initiative to strengthen Agricultural development by allocating a chunk of the 2021 Budget towards empowerment in the sector through the cultivation of 100 hectares of land in each of the 21 Local Government Councils across the State”.

Adding that his Government has trained 500 out of the 2000 youths to be trained on empowerment programme; opened a window for employment of 2000 youths in Primary Health Care and 2000 in Post Primary.

Governor Ahmadu Umaru FIintiri express optimism that engagement and dialogue with the Youth is more powerful than isolation as witnessed in the past, and the changes his administration is making will improve the lives of the people.

“I believe you reserve the right to speak and gather freely, and access information as it is ultimately up to you to be able to find your own voice and create democracy and freedom in a civilised way”, Governor Fintiri maintained.

“On the part of this administration, we are ready to dialogue to help you become the leaders of tomorrow”.

In their separate remarks the spokesman of youths in Central Zone Mal. Zubairu Baba Majindadi, Spokespersons from Southern Zone Bala Hamman and Esther Dishon as well as spokesman of Northern Zone Naziru Mohammed said the peace loving youths in the State expressed dismayed over the activities of the hoodlums, destroying public and private properties in some parts of the State.

Which informed them to observed a minute silence over the regrettable act of destruction on properties involving youths in the State.

They lauded Governor Fintiri for embarking on projects that is taken Adamawa to greater height and thanked him for his administration’s free education policy that has helped children of the masses to have access to free education; at the same time paid SSCE examinations fee to all final year students in all public secondary schools in the State.

The spokesmen lauded the security architecture of Governor Fintiri describing it most successful. Maintaining it has helped in restoring peace especially in the northern zone which was devastated by the activities of insurgency, kidnapping and other criminality especially.

They assured Governor Fintiri their unflinching support for his administration.