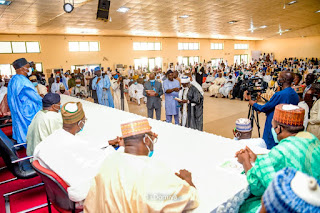 Performing the ceremony, Friday at Banquet Hall Government House Yola, Governor Fintiri described Shaikh Daware as a man with proven character and a man who do justice to all.

He charged the renown cleric to work towards ensuring transparency and successful pilgrimage to Adamawa Muslim in the holy land of Mecca.

Governor Fintiri assured that under his watch, no intending pilgrim will be charge any amount above what has been approved for hajj, maintaining that he will give necessary support for the new Chairman Muslim Pilgrim Welfare Board, Sheik Daware to succeed in executing his responsibilities.

In his acceptance speech, Sheik Ibrahim Abubakar Daware thanked Governor Ahmadu Umaru Fintiri for finding him worthy to be chairman of the State Pilgrim Welfare Board. Assuring not to disappoint the confidence repose on him.

He lauded Governor Fintiri for his unbiased appointments in his administration, describing it a welcome development for the stability of the State.

The renown Islamic scholar thanked his larger supporters for supporting him and enjoined them to pray for him to succeed in the responsibilities given to him.

He thanked Governor Fintiri for appointing people with proven character to pilot the affairs of Muslim Pilgrim Welfare Board.