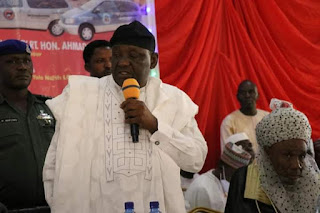 By: Yusuf Umar
Adamawa State Government has reaffirmed its determination to kick poverty out of the State by exploring all avenues to empower youths and women.
The deputy Governor, Chief Crowther Seth gave the assurance at the 2020 youths and women empowerment programme organized by the Honourable Member representing Yola North in the State of Assembly, Hamidu Sajo Lekki.
The deputy Governor flagged off the distribution of the empowerment items to include; Vehicles, Tricycles popularly known as "KEKE NAPEP", Sorwing machines among others at Muna Hotel Jimeta on behalf of Governor Ahmadu Umaru Fintiri.
He commended the lawmaker for his foresight to empower his constituents in line with the people oriented policies of the Fintiri's led government.
He said the fresh air government will continue to initiate more empowerment programmes to change the ugly narrative of youths and Women joblessness in Adamawa. 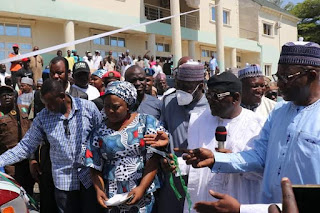 Chief Crowther maintained that youths and women empowerment has been the major priority of the present administration, hence the demonstration of that by member representing Yola North in the state Assembly Hamidu Sajo Lekki.
The deputy Governor also reminded the beneciaries on the need for them to make judicious use of the items for desired result.
On his part, Hon. Lekki said youth empowerment is of paramount importance given the level of increase in crime rate and other social vices that have bedevilled the society. He said such programmes will be maintained in order to compliment government's efforts aimed at combating poverty.
Those at the event include the Hon. Speaker Adamawa State House of Assembly, Aminu Iya Abbas and other Members of the legislature,  Hon. Commissioners, the State PDP Chairman Abubakar Tahir Shehu, District Head of Jimeta Inuwa Baba Paris, former Head of Service, Musa Kaibo, and the Head of PAWECA, Aishatu Bello Bawa among other top Government officials.
23:16
Adamawa Daily Reports
Email ThisBlogThis!Share to TwitterShare to Facebook