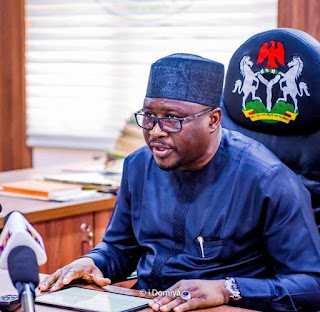 Adamawa State Governor, Ahmadu Umaru Fintiri said that soon his administration will start construction and renovation of courts across the state  to make it conducive for speedy dispensation of justice.

Governor Fintiri made the assurance while declaring open a two-day capacity building training for the state Counsel and investigators in various Government Agencies in Adamawa State organized by J-K Gadzama LLP under the auspices of the Adamawa State Government with the theme: Novel provisions, procedures and processes in the administration of criminal justice law of Adamawa State (A-ACJL) 2018, and mode of generating and tendering electronic evidence under the Evidence Act.

Represented by Chief of Staff Government House Yola, Prof. Maxwell Gidado, Governor Fintiri said the building training and its theme came at the time that the state is championing the course of fighting crime especially kidnapping, cattle rustling, insurgency ad other criminalities.

Governor Fintiri enjoined Counsels and Investigtors to be attending seminars and workshops such as the one they are participating to update their knowledge while urging the participants to make good use of the knowledge they will acquire in executing their obligations.

He explained that due to the loopholes in the CPC, the Adamawa State ACJL was enacted to address the inadequencies in the criminal justice system.

"The ACJL contains beautiful provisions considered to be in tune with global best practices. Thus, kindered legislations such as the Police Act, 2020, have towed the same path by re-enforcing the innovative provisions in the ACJL" Barr. Jingi said.

Higlighting the overview of the programme, Joe Kyari Gadzama, SAN said Adamawa State Criminal Law of Justice of 2018 stands the test of time, adding it can be on same scale with criminal laws of other states in Nigeria and other part of the world.