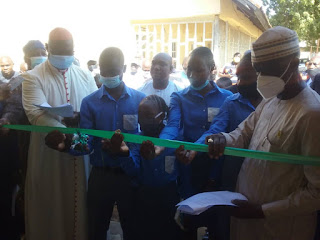 The Secretary to the Government of the Federation, Barr. Boss Mustapha has handed over facilities he upgrade, procured and donated to the Lutheran Junior Seminary Mbamba.

The facilities were immediately commissioned by the Archbishop Lutheran Church of Christ in Nigeria (LCCN) Most Rev. Musa Panti Filibus for onward use.

Handing the facilities to the school, Barr. Mustapha said he donated the facilities as part of his contribution in upgrading the knowledge and providing conducive learning environment to students.

Represented by former Adamawa State Head of Service, Dr. Louis Solomon Mandama, mni, Barr. Mustapha said that the facilities is for the benefit of the larger community.

He call on people who have means to contribute their quota in the development of education so as to have vibrant and dynamic future leaders who will take the country to an expected level.

In his remark, the Archbishop LCCN and President Lutheran World Federation Most Rev. Musa Panti Filibus thanked SGF Boss Mustapha for ameliorating the suffering of the students in getting portable water.

He expressed optimism that the students will now compete favourable with their counterparts across Nigeria, having their school has been equipped with electronic learning facilities and provided with conducive learning environment. He charged the school authorities and the students to make good use of the facilities donated. 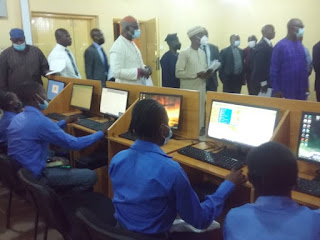 In his welcome address, the Acting Principal Lutheran Junior Seminary, Mr. Emmanuel P. Bapatu listed the facilities upgraded and donated to Lutheran Junior Seminary by SGF Barr. Boss Mustapha to include: 40 desk computers and 80 accessories required to fix them, 2 laptop computers, 1 scanner and colour printer, projector and generating set, fully connected to the internet for a period of 12 months by the National Communications Commission (NCC).

Others are: upgraded block of 2 hostels and provision of 100 pieces of mattresses which can accommodate 80 students and drilled a motorised borehole with a capacity of 5,000 litres for the entire community through Federal Ministry of Water Resources.

The Acting Principal revealed that former SGF, Engr. Babachir Lawal has facilitated the provision of 16 Desktop Computers and all its accessories connected to the internet with 12 months subscription in 2016, which the school converted it to Electronic Library.

Speaking on behalf of the students, Peace Kafulama and Abbassy Awi Michael thanked SGF Boss Mustapha, the LCCN and the school management for ensuring that LJS is upgraded.

Meanwhile, the representative of the SGF, Dr. Louis Solomon Mandama mni, Dignitaries at the occasion and Management of Lutheran Seminary and Lutheran Junior Seminary were taken round the school by the LJS Board Chairman, Prof. Zemas Kumara for commissioning of projects donated to the school and the ones constructed by the school executed at both LJS and BLS school.