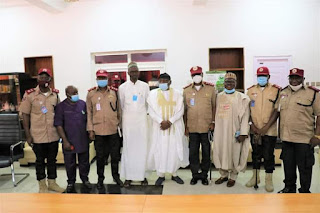 By: Yusuf Umar
The Corps Marshal Federal Road Safety Corps, Dr. Boboye Oyeyemi has commiserated with the Adamawa State Government over the recent vandalisation of government and private properties in the state occasioned actions of hoodlums in the wake of  the EndSars protest.
He conveyed the commiseration message to Governor Ahmadu Umaru Fintiri while in the State for an  on the spot assessment of damaged facilities at the command in Yola.
The officials from the Federal Road Safety Corps who were  led by the Corps Marshal  Dr. Boboye Ayeyemi were received by the Deputy Governor, Chief Crowther Seth along side the Chief of Staff Professor Maxwell Gidado and the Secretary to the State Government Mallam Bashiru Ahmad.
The team intimated the deputy Governor on the purpose of the visit which include; commiserating with  the State Government on the recent aftermath of the  EndSars protest that culminated  into distruction of both public and private properties and to also  assess the level of damage, with a view of giving them roadmap geard towards rehabilating the vandalized properties.
The incident according to the FRSC Boss has left the State Governmen and private individuals to count their losses ofof whi the FRSC Adamawa State command was not spared.
Dr. Oyeyemi maintained  that the unfortunate situation has crippled their activities, as the command office in Yola among other valuable items were destroyed to a large extent.
While commending the Fintiri's Government for its response, he appealed for partnership by Federal and State Governments in order to  rehabilitate the vandalized properties.
Fine, he had revealed plans to introduce number plates production plant in the state for easy access by the motorists and other vehicle users in Adamawa and Taraba but maintained that the State Governments should be ready to compliment the effort by providing a secured office accommodation for the purpose.
Responding, the deputy Governor Chief Crowther Seth frowned at the level of wanton  destruction witnessed in the state and  commended the action taken by Governor Ahmadu Umaru Fintiri in his Swift response at  tackling the problem headlong.
He therefore, reassured that the State Government is trying its best, noting that a  committee has been set up to evaluate the damage done on both Government and private properties with a view to  giving the Federal and State Governments direction with which to partner in rehabilitating the damages caused by hoodlums and miscreants.
10:53
Adamawa Daily Reports
Email ThisBlogThis!Share to TwitterShare to Facebook