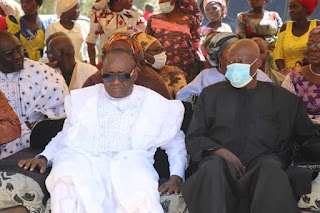 By: Yusuf Umar
The Adamawa State Deputy Governor, Chief Crowther Seth has paid his last respect to the late Engineer Edward Fyada, whose corpse was finally committed to mother Earth in his home town Kodomun in Demsa Local government of Adamawa State.
While commiserating with the family, he urged them to take solace in God.
The Deputy Governor in company of some special advisers were in Kodomun community on Saturday to witness the burial of late Engineer Edward Fyada who was the former rector, Adamawa State polytechnic and Garkuwa Kodomun.
He said, Adamawa State government is with the entire family and the community in such moment of pains, stressing that Bwatiye land will miss his benevolence and generosity.
He emphasized that the departed soul was an icon and achiever who spent his life serving God and humanity.
Chief Crowther however, noted that one cannot question God, hence the need for the family to summon the  courage to bear  loss.
Earlier in a sermon, Pastor Joseph Umaru of house on the Rock Church Kaduna State, reminded those he left behind that there is time for everything under the sun.
He maintained that late Engineer Fyada has lived an examplary life worthy of emulation,  and prayed God to grant the departed soul eternal rest.
Special prayers was also offered for God to protect and comfort the family.
Late Engineer Edward Fyada was born in 1957 and died on 29th October, 2020 after a brief illness at the age of 63.
He survived by a wife, five children, grand children, brothers and sisters.
11:13
Adamawa Daily Reports
Email ThisBlogThis!Share to TwitterShare to Facebook